Blog > Archive > In praise of Midwestern flavors: Amy Thielen’s “Give a Girl a Knife”

I’m a memoir junkie and also a fan of cooking shows (though I don’t cook much myself—go figure). These interests dovetail in books written by chefs, food critics and others chronicling their personal journeys to and through the professional world of food. 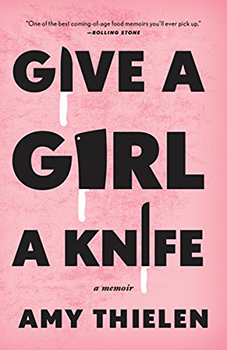 Along these lines, I greatly enjoyed Amy Thielen’s 2017 book “Give a Girl a Knife,” her tale of growing up in the small town of Park Rapids, Minnesota, and, for the latter part of high school, the Twin Cities suburbs. After finishing college in St. Paul, she headed to New York for culinary school and spent several years in the trenches of high-end restaurants there, eventually returning to her home state and the even smaller town of Two Inlets.

More precisely, though: even during her New York years, Thielen and her artist husband bounced between Brooklyn and the Northwoods, where, over the years, they improved on a rustic home he had begun building. Eventually, they found their nomadic lifestyle too unwieldy—and the lure of home too strong—and committed full-time to Minnesota.

I first became aware of Thielen from her former Food Network program, The Heartland Table, and later stumbled upon her blog post about the joys of eelpout (aka burbot or lawyer, an often underrated fish) after finally getting to try some at a fish market in northern Minnesota.

Not only is Thielen a vivid and engaging narrator whose willingness to follow her passions has paid off, I appreciate her resolute pride in the traditions and flavors of the Upper Midwest. While there is some truth to the jokes about gloppy casseroles and Jello salads, the Midwest does have rich and varied food traditions of its own—including many surrounding the freshwater fish found here—that reflect the heritage of its people, from original inhabitants to immigrant populations. 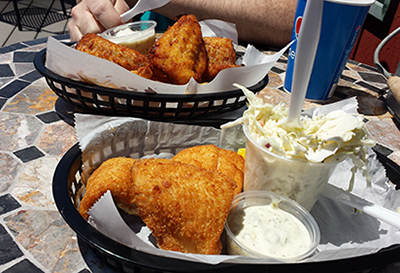 Here at Wisconsin Sea Grant, one of our efforts is the Eat Wisconsin Fish project, which encourages consumers to think local when they buy fish, whether that means wild-caught in the Great Lakes or sustainably farmed by Wisconsin fish farmers. (And, of course, we support those who like to catch their own fish!)

As someone who eats fish often and prefers it over many other proteins, I have found that Eat Wisconsin Fish has nudged me to shop more carefully and seek out Wisconsin (or other Great Lakes states’) products when possible. I even find that I now try more carefully to buy other local food products, too, from eggs to local coffee roasters. Especially in a volatile economy, I like knowing my choices are supporting regional companies and jobs.

In “Give a Girl a Knife,” Thielen offers a thoughtful approach to the flavors and landscapes of the Upper Midwest. Even better, she’s just plain entertaining to read. (For more from Amy Thielen, check out her James Beard award-winning cookbook, “The New Midwestern Table: 200 Heartland Recipes“, or find some of the recipes from her Food Network show online, like this one for Crispy Trout with Kitchen Butter Sauce.)