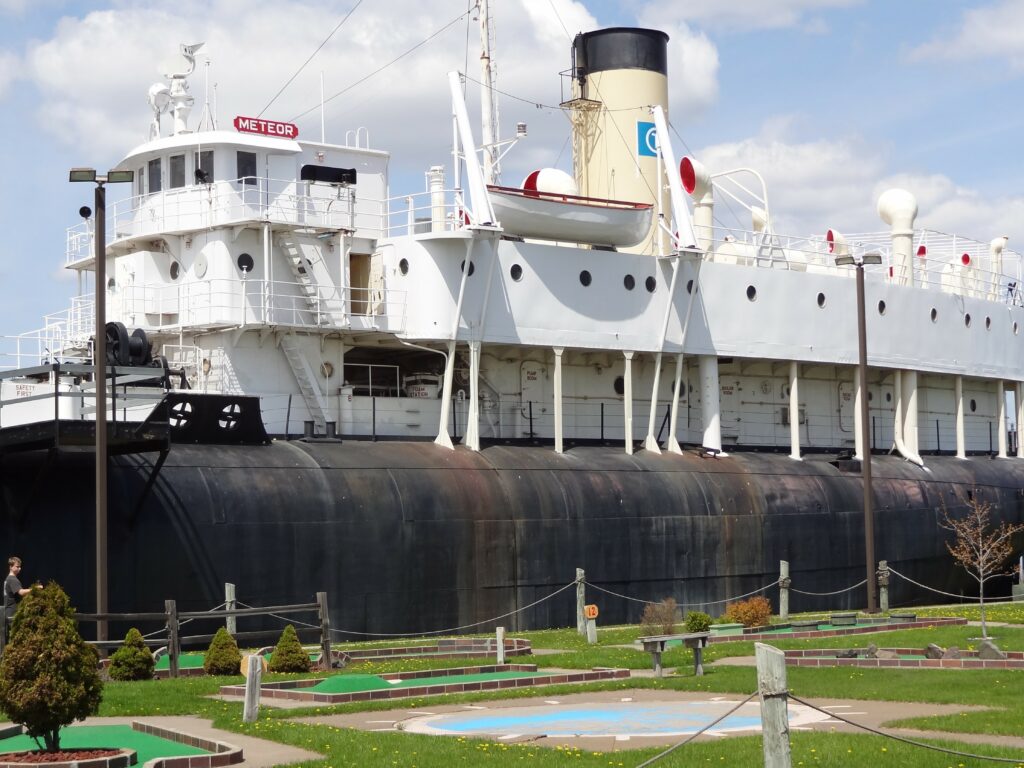 A momentous event happened last week in Superior, Wisconsin. After 10 years of working in Wisconsin Sea Grant’s Lake Superior Field Office next to the SS Meteor – the last remaining whaleback ship in the world – I finally took a tour of it.

I’d written about the ship before in a story about maritime history geocaching – the ship is one of the stops in a Wisconsin Sea Grant-funded outreach project designed to highlight the history of the state’s shipping industry. And, I’d walked around the outside of it plenty on my daily roams around Barker’s Island, but I’d never been inside before. A tour was one thing I mentally wrote down on my Barker’s Island Bucket List. I meant to get around to it, but never did. 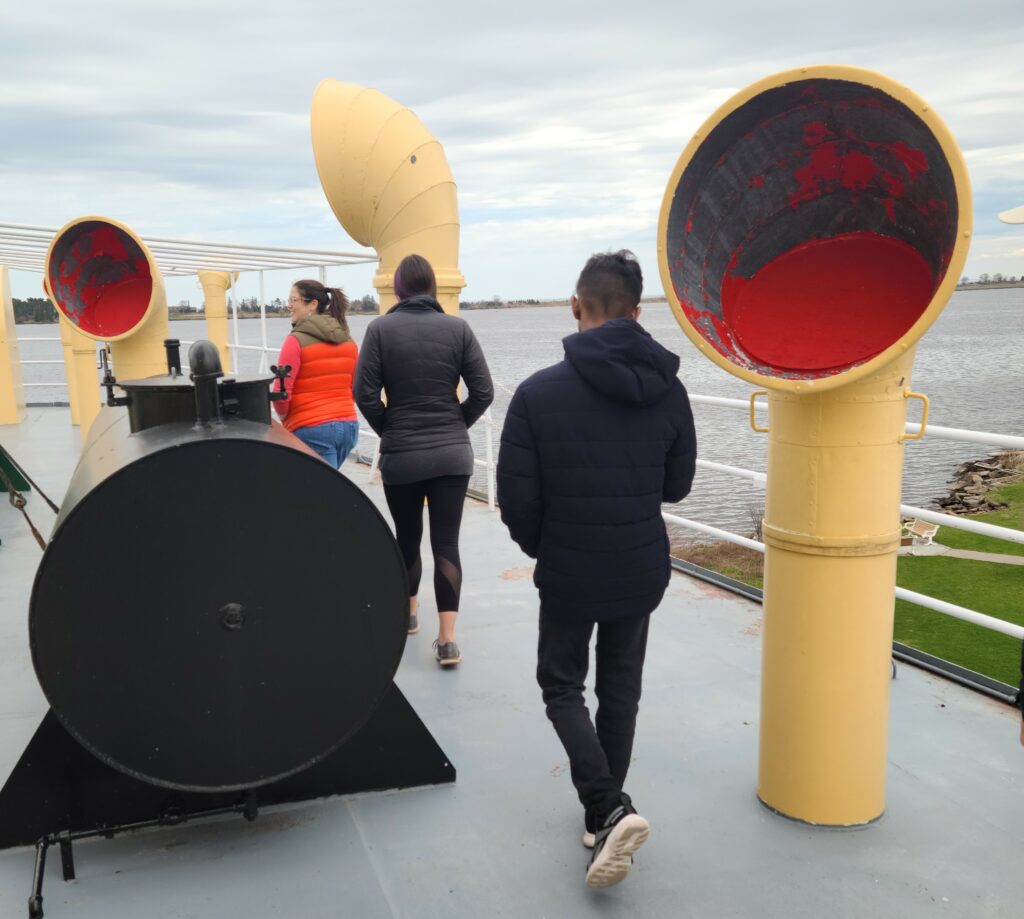 The free visit was arranged by my office partners, the National Lake Superior Estuarine Research Reserve, to train volunteers who work at their interpretive center during the summer. They had room, so invited their officemates (like me), along.

We met inside the ship in the gift shop for a short orientation, then went back outside and up a ramp where we were able to wander among the tall vents that brought air into the ship while keeping sea spray out. Along the way, our tour guide explained that the ship was built locally by Captain Alexander McDougall. Whalebacks were a new innovation in ship design back in the late 1800s, known for their cigar-shaped steel hulls that rode low in the water when loaded with cargo. Waves just washed over them, and the water was easily shed, unlike with typical ships. The Meteor carried a variety of cargoes over the years, including iron ore, grain, gravel, cars and oil.

After climbing a stairway, we went inside, taking a peek into the pilot house and then descending a short stairway to the living quarters. The officers’ quarters were closer to the bow of the ship, while the lowly seamen slept near the rear of the ship, above the noisy engine. The captain had his own spacious office and private bathroom. 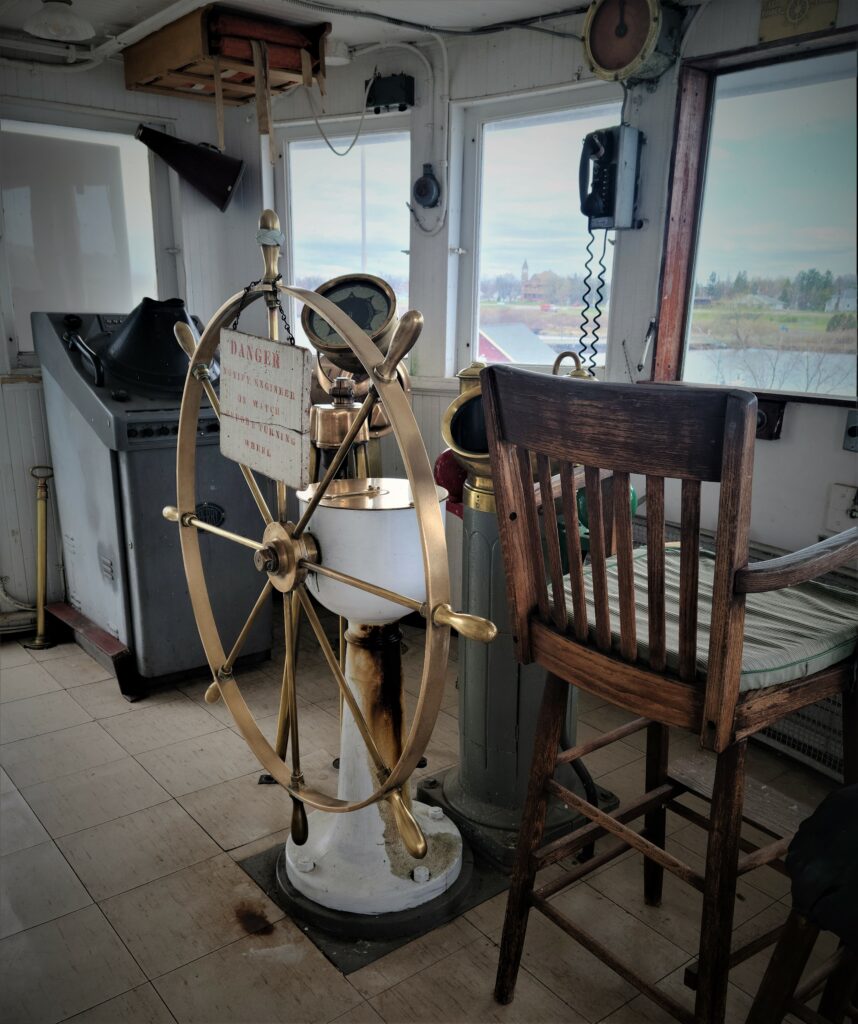 The kitchen and dining rooms were on the deck below the bedrooms. The crew and officers had separate dining rooms. Timeliness of dining must have been an issue, since there were signs in both rooms proclaiming strict serving hours. Another historic placard described steps to take in event of an atomic bomb attack.

Below the dining deck were the engine room and storage areas. The ship’s last load must have been oil, since the smell of petroleum was strong as we walked through, and we could see pools of oil seeping up from sand used to cover it.

The Meteor was built in 1896 and ended its shipping career in 1969 when it ran aground on a shoal off Marquette, Michigan. Because of severe damage to the hull, the shipping company chose not to repair it. Recognizing the ship’s historic importance, the Meteor was purchased, repaired, and began use as a museum ship in 1971.

Our tour ended with a stroll through historical displays that provided more information about McDougall and the ship. The excursion was better than I’d imagined, sitting so close to the attraction for all these years.

If you’re ever in Superior, consider taking a tour of this fascinating piece of maritime history.

Now all that’s left for me to do on my Barker’s Island Bucket List is to take advantage of the mini golf course that’s between my office and the ship! 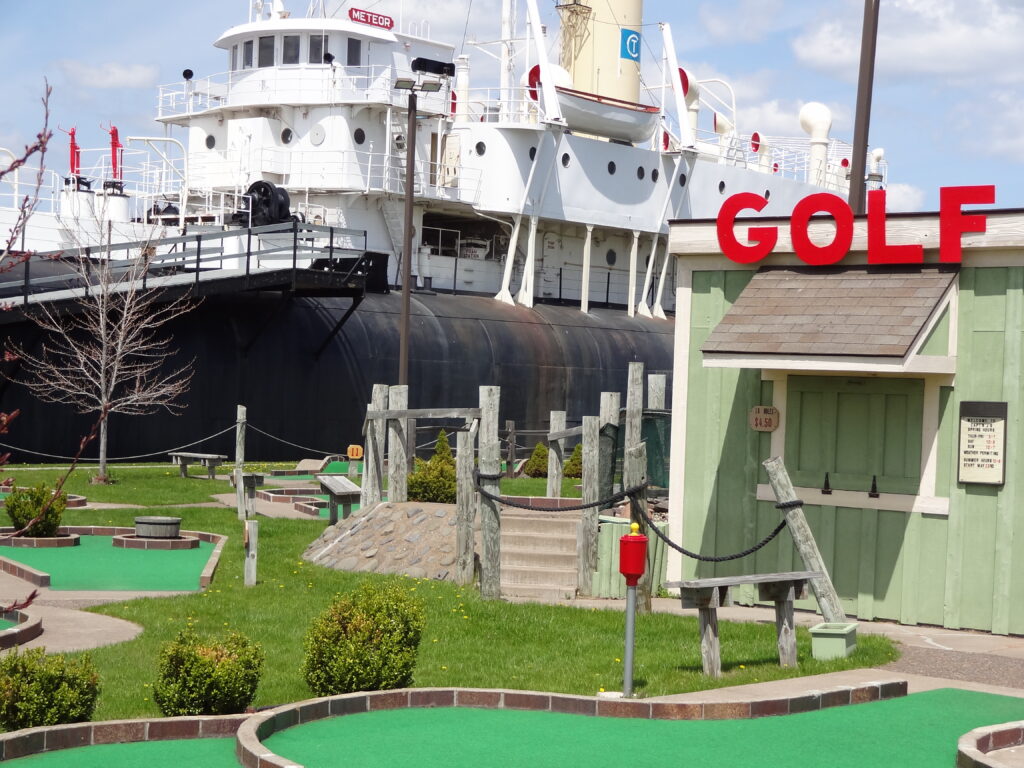