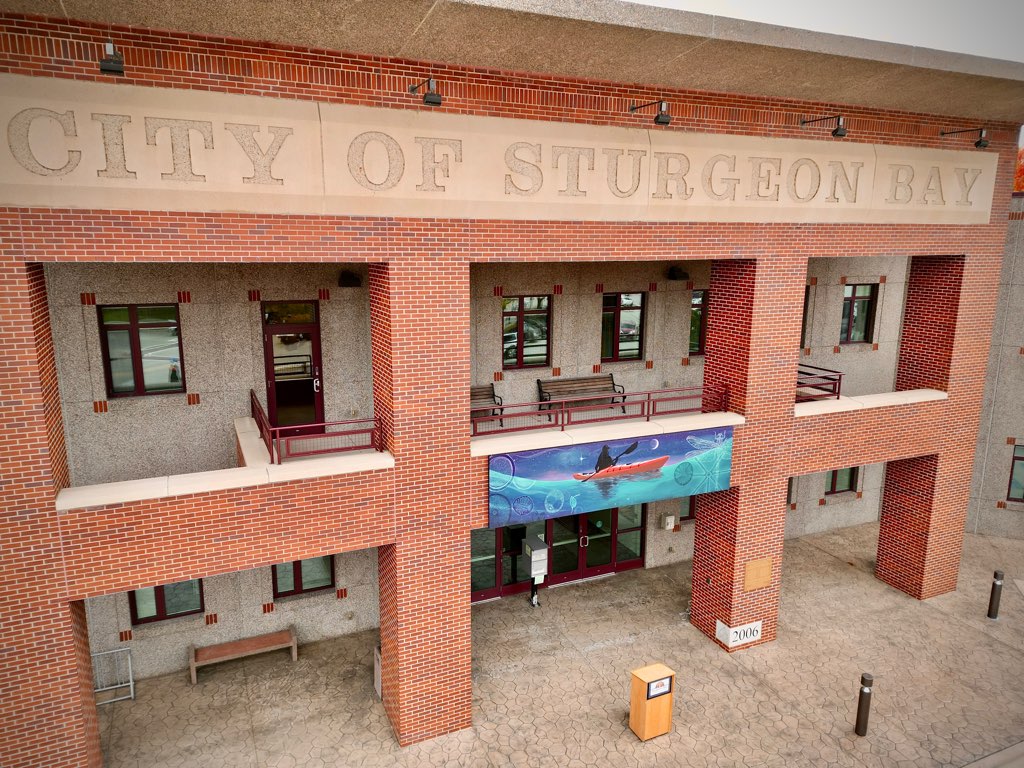 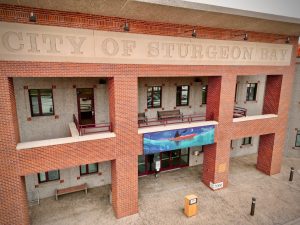 A drone shot of the mural above the main entrance to Sturgeon Bay City Hall. (Photo: Spencer Gustafson)

To celebrate its 50th anniversary year, Wisconsin Sea Grant unveiled a work of public art on Oct. 15, 2022, at Sturgeon Bay City Hall. It will remain above the main entrance to City Hall at least through 2023.

The mural focuses on the Lake Michigan food web. It was created by artists Don Krumpos and Erin LaBonte of Algoma and Jody Henseler of Two Rivers. Henseler is also a science teacher in the Manitowoc Public Schools.

Henseler described group’s concept: “The goal of our mural is to highlight species native to our great Lake Michigan. Many people are familiar with the prehistoric lake sturgeon, walleye, whitefish and bass, but what about psychedelic-looking algaes like diploneis, stephanodiscus and tabellaria? These are the lake’s unsung heroes and the base of our food chain. They need to be celebrated, known and understood so that we humans can work to keep our waters clean and these microorganisms thriving.”

The mural’s design also highlights human uses of the lake through the inclusion of a kayaker. The mural places our human world within a larger ecological context, where there is much more to life in the lake than what meets the naked eye.

The mural project was done in partnership with the city of Sturgeon Bay. It was unveiled at a public event featuring remarks by the artists, city officials such as Mayor David J. Ward and city administrator Josh Van Lieshout, and Sea Grant staff member Jennifer Smith. Helen Bacon, the District 1 city councilor and arts board chair who played a key role in the project, emceed the event.

Wisconsin Sea Grant is headquartered at the University of Wisconsin-Madison and has field offices in several communities around the state: Green Bay, Manitowoc, Milwaukee, Kenosha County and Superior. The organization promotes the sustainable use of Great Lakes resources through research, education and outreach. It is part of a national network of 34 Sea Grant programs in coastal and Great Lakes States.