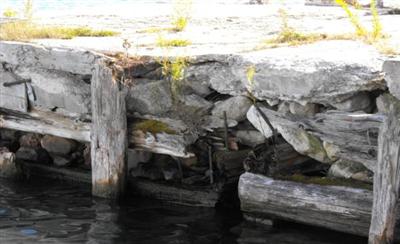 Many of the early harbor entrance breakwaters were constructed with an underwater timber crib base filled with rock. On top of the structure a cap of either stone or concrete would be added as a superstructure above the water surface. Often unseen due to being underwater, the timber can last indefinitely. However, when exposed to air, the timber will begin to experience rot and/or abrasion damage due to ice or ships. Damage due to borers is not seen like that in marine harbors due to the fact that freshwater wood borers are not present. Failing timber cribs have been observed at many of the older port and harbors as the timber core sections begin to decay and slump, bringing the superstructure down with it. Several Great lakes locations have experienced complete failure of the structures due to the deteriorating timbers. This problem has increased in the recent decades due to the lower than average water levels being experienced by the Great Lakes for the last several years. Another reason why more timber crib structures have failed recently is that the steel pins used to connect then have been corroding (refer to section on Accelerated Freshwater Corrosion). Poor foundation conditions also have led to failed timber crib structures.

Repair methods include complete replacement of the failed structures, encapsulating the deteriorating timber with chemical compounds such as epoxies or fiberglass jackets, placing additional stone in front of the failed sections or driving new steel or concrete pilings with concrete panels (solder pile designs). 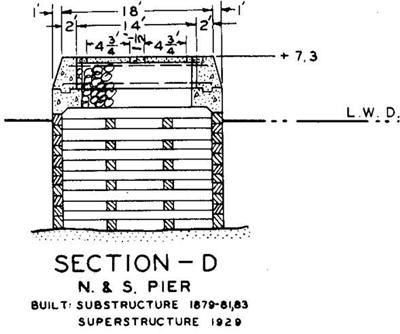 Outer harbor entrance structures as well as many vertical slip dock walls have been constructed with steel sheet pile sections. The outer breakwater sections are often built as steel circular cells, while the inner wall s are straight steel bulkhead designs. Recent discoveries of accelerated freshwater corrosion have shown many Lake Superior steel structures to have deep pits or perforations completely through the steel which seriously has compromised the structural integrity of the steel walls. This corrosion has also been observed with steel pipe or H piles as well. Much research is being complete to determine not only the cause of this unusual phenomenon but also appropriate rehabilitation and repair methods. Steel pins are also used to keep timber crib structures intact and these pins have failed at times as well. See the section on Accelerated Freshwater Corrosion for more details. 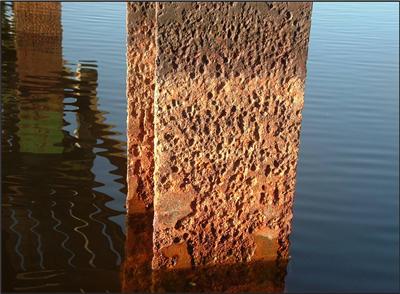 Many structures utilize rock for base foundation material, scour protection or for the entire structure itself such as large rock breakwaters. Rock structures can also fail and have failed in the past. Not all rock is good quality rock. Soft, abrasion non-resistant rock or rock with failure seams or cracks can break apart and become several pieces of smaller rock. When this happens the rock can be easily displaced by wave, flood and ice action. Quality control at the source (such as at the quarry) is of utmost importance to receive good quality structural rock for Great Lakes use.