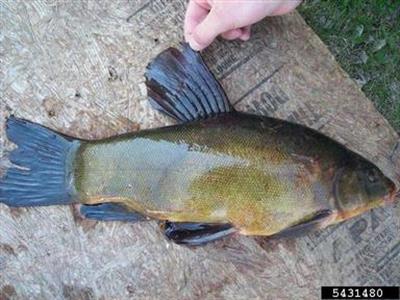 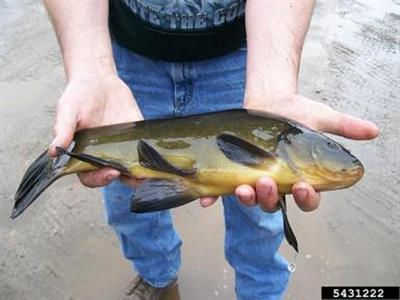 Where did the tench come from?
Tench are native to Eurasia. They were imported from Germany in 1877 by the U.S. Fish Commission for use as a food and sport fish. Tench were stocked in many lakes during the 1880s and 1890s. Although most tench populations result from stocking, some are a result of escapes.

Why is it a problem?
Tench have a tendency to stir up the muddy bottom of the lakes and rivers where they live, and the fine sediments can suffocate eggs and newly hatched fish of native species. They may also compete for food with trout and other game fish.

What habitat does it prefer?
Tench live near the muddy bottoms of lakes and slow-moving rivers. They enjoy dense aquatic plant growth and are not generally seen in areas with very clear or fast-moving water. They become dormant in winter and stay in the mud without feeding.