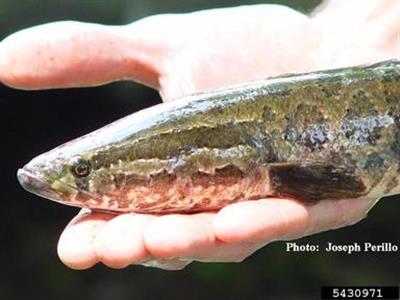 Where did the northern snakehead come from?
It is native to China and was introduced either from purchases at live-food markets or as aquarium pets. Individuals were discovered in other locations, but the first established population was found in Crofton, Maryland in 2002.

Why is it a problem?
Northern snakeheads are predators that compete with–and eat–native species for food. They can survive in a wide range of environmental conditions, including water with low oxygen levels. An established population is very difficult to eradicate.

What habitat does it prefer?
The northern snakehead thrives in muddy or vegetated areas, with slow-moving or stagnant water.