In the week before Thanksgiving, Wisconsin Sea Grant is considering gratitude. Why are we thankful? 2022 marked a yearlong 50th anniversary commemoration. We have been grateful for the opportunity to provide decades of service to Wisconsin’s coastal communities, promote freshwater learning and contribute research findings to benefit the whole Great Lakes Basin.

A brand-new 50 years video celebrates this past and looks to Great Lakes science for our future through reflections from staff members collected throughout the past 12 months. 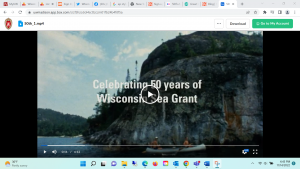 “Wisconsin was the first state in the Great Lakes region to develop a Sea Grant program,” said Moira Harrington, Sea Grant’s assistant director for communications. “In a state with a long history of environmental stewardship and the home of such environmental giants as John Muir, Aldo Leopold and the founder of Earth Day, Gaylord Nelson, we are particularly proud to have also embraced the Sea Grant model to use research, education and outreach to better understand, use and protect our globally significant freshwater assets. We’re also proud to share this video that recounts the history.”

The new six-minute video uses archival video to revisit touchpoints such as the 1963 proposal from scientist Athelstan Spilhaus to establish a national Sea Grant College Program, Congress’s adoption of the program in 1966 and ratification of the binational Great Lakes Water Quality Agreement during the Nixon administration.

In vintage footage, the video also depicts unfortunate chapters of the lakes—the arrival of the nonnative sea lamprey and its negative effects on the fishery, pollution shutting down beaches due to open pipes gushing contaminants and nutrient runoff tainting waters. 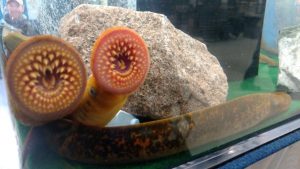 Nonnative sea lamprey have had an effect on the Great Lakes food web. The video has footage of the fish. Photo by Titus Seilheimer.

The somewhat grainy footage then shifts, giving way to contemporary shots of Sea Grant-funded research and education and extension initiatives. A concluding quote best summarizes what probably all of us could get behind, “I really believe that we need to talk about hope. We have to give people a strong vision of where we want things to do because as soon as we do that we start moving toward it rather than focusing on the negative things that have happened in the past,” Julia Noordyk, water quality and coastal communities specialist said.