Three grants totaling more than $334,000 were awarded to Wisconsin Sea Grant to support the state’s commercial fishing and aquaculture industries, particularly in the areas of career development and resilience planning. 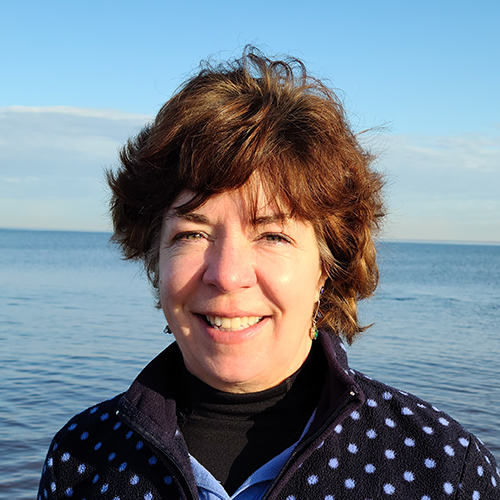 Recently, NOAA Sea Grant announced federal funding to aid the sustainable growth of the U.S. seafood industry. One of the efforts focuses on the long-term impacts of the COVID-19 pandemic on seafood resources. Wisconsin Sea Grant has been awarded $186,000 in funding through that competition, meant to increase the resilience of the seafood sector to respond to future disruptions. The project has a two-year time span and was one of 13 awarded nationally by NOAA Sea Grant. Sharon Moen, Wisconsin Sea Grant’s Eat Wisconsin Fish outreach specialist, is the project lead.

A second recently announced grant of $98,000 was awarded through NOAA Sea Grant and NOAA Office of Sustainable Fisheries (more specifically, through the “Food from the Sea” Careers Program). 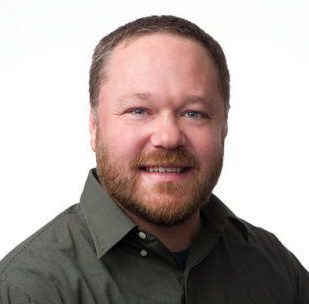 A third grant of $50,000 enables the Eat Wisconsin Fish initiative to continue to grow its outreach potential over the next year. Moen leads this project.

“It is exciting that NOAA Sea Grant selected these three Wisconsin proposals for funding,” said Moen. “Food fish—both wild-caught and farm-raised in the U.S.—is an important part of our economy and food security. This funding will enable us to build on our efforts to help commercial fishers and fish farmers thrive in a challenging environment.”

The commercial fishing side of the projects focuses on developing the Great Lakes region’s first-ever apprenticeship program in fishing and fish processing. “Commercial fisheries across the country are graying as the older generation gets older, but who will take the wheel to keep these fisheries going?” said Seilheimer.

Continued Seilheimer, “Our work will build the framework for an apprenticeship program to train the next generation of commercial fishers. We will learn from tribal and state fishers about the needs and wants for a new training program. We hope to build an apprenticeship program that will provide an experienced workforce for tribal and commercial fisheries for years to come to support sustainable Great Lakes fisheries.” 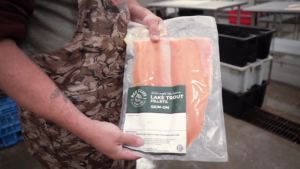 Clarence Pratt of the Red Cliff Fish Co. shows a vacuum-sealed package of lake trout from Lake Superior that has just been processed. (Photo: Bonnie Willison)

While the pandemic has been tough all-around, noted Moen, “It has had a disproportionate impact on Indigenous commercial fishers.” One partner in this project is the Red Cliff Band of Lake Superior Chippewa, which operates the Red Cliff Fish Co. The fish market prioritizes local retail sales and supplying Lake Superior fish to Native American elders.

While other states have apprenticeship programs focused on commercial fishing and fish processing, Moen said this one will focus on needs specific to the Great Lakes.

The aquaculture side of the projects will include efforts to inform fish consumers and the general public about fish-farming methods.

“Aquaculture in the U.S. has come a long way in the last several decades, and public perceptions have not kept up with reality,” said Moen. “Regulations in the U.S. as a whole are quite strict, and even more so here in Wisconsin, which should give consumers confidence that they’re choosing a safe product that has been raised responsibly. It pays to check labels or ask at the fish counter when you’re shopping.”

Moen and Seilheimer will carry out the funded activities along with members of Sea Grant’s science communication and education teams.

At their core, the three grant-funded projects are responding to challenges faced by Wisconsin fish farms and commercial fishers, from pandemics to workforce issues. “In the end,” said Moen, “We want to create a stronger food network and food systems so that when future disruptions happen, we’ll be better prepared.”