Wisconsin Sea Grant will participate in three recently announced federally funded aquaculture projects that will support a sustainable, domestic food supply and decrease America’s seafood trade deficit. Currently, 85% percent of seafood in the U.S. is imported, resulting in a $14 billion trade deficit, according to the National Oceanic and Atmospheric Administration (NOAA).

The three projects involving Wisconsin Sea Grant are part of a larger national package of $16 million in federal funding awards that will support 42 research projects and collaborative programs to advance sustainable aquaculture in the U.S. Funded projects will take place over the course of up to three years.

The National Sea Grant Program, part of NOAA, announced the awards Sept. 19. Wisconsin Sea Grant is one of 33 Sea Grant programs around the country. Programs are located in coastal and Great Lakes states, as well as Puerto Rico and Guam.

Jonathan Pennock, director of the National Sea Grant College Program, said of the funding awards, “With our 2019 investments, we are building on investments by Sea Grant and NOAA over the last few years to fill critical gaps in information and strengthen connectivity of science to industry. These investments will help advance U.S. aquaculture in sustainable, thoughtful ways using the best science and talent across the country.” 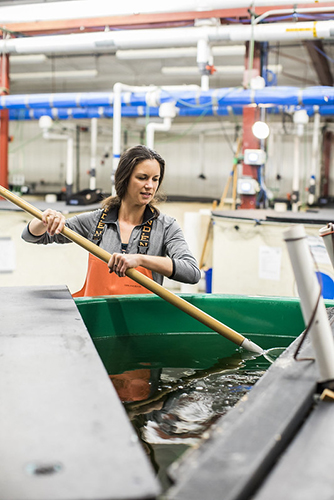 Aquaculture Outreach and Education Specialist Emma Wiermaa is pictured at the UW-Stevens Point Northern Aquaculture Demonstration Facility (USWP NADF) in Bayfield, where she is based. Her position is jointly supported by UWSP NADF and Wisconsin Sea Grant. (Photo: Narayan Mahon)

Wisconsin Sea Grant is a partner in this group spearheaded by Minnesota Sea Grant. Other partners include the Wisconsin Aquaculture Association and similar industry groups in Minnesota, Michigan, Illinois and Ohio, as well as the North Central Regional Aquaculture Center of the U.S. Department of Agriculture.

The collaborative will address barriers that have prevented the growth of existing aquaculture businesses, as well as the start of new ones, in the Great Lakes region. Its primary goal is to support an environmentally responsible, competitive and sustainable aquaculture industry.

Said Emma Wiermaa, aquaculture outreach and education specialist for Wisconsin Sea Grant, “The Great Lakes Sea Grant Aquaculture collaborative is bringing together the expertise that Sea Grant has in this field across seven states, including Wisconsin, Minnesota and Michigan. There are so many great efforts already being done for aquaculture through Sea Grant programs, so we’re joining forces to streamline and strengthen this effort.”  Wiermaa’s position is jointly supported by Wisconsin Sea Grant and UWSP NADF, where she is located.

Read more about this project on the Minnesota Sea Grant website.

Building capacity of land-based Atlantic salmon aquaculture in the U.S.

Maryland Sea Grant is leading an effort in which Wisconsin Sea Grant is a partner, along with UW-Stevens Point and Hixton, Wisconsin-based Superior Fresh, the world’s largest aquaponic farm.

This project will build a network to provide broad support and guide future federal investment toward responsibly building the U.S. salmon aquaculture industry, with a focus on land-based recirculating aquaculture systems.

Read more about this project on the Maryland Sea Grant website.

This project will investigate the potential of oxygen nanobubbles in recirculating aquaculture systems and better understand their effects on fish growth, fish health and water quality in cool- and cold-water systems. Results will be shared with stakeholders through UWSP NADF’s and Wisconsin Sea Grant’s communications and outreach channels to aid fish farmers.