For Wisconsin Sea Grant Fisheries Specialist Titus Seilheimer, the path from research to impact is not always a direct one. But at present, with a public hearing scheduled for Nov. 20 on a proposed rule change regarding lake whitefish trawling in Lake Michigan, Seilheimer can see how his research may lead to a possible change in Wisconsin’s administrative code. 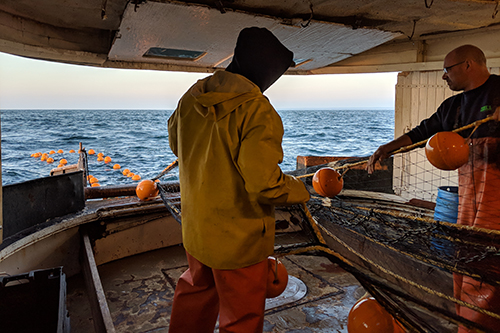 Nearly five years ago, in February 2015, the Manitowoc-based Seilheimer embarked on a study involving an experimental trawl fishery for whitefish in Lake Michigan. He worked closely with the Susie Q Fish Co., a family-owned business in Two Rivers with decades of experience in Lake Michigan waters.

The output of that research is a 60-page report that may spur a rule change that would allow trawling for whitefish, a species prized by consumers for its delicate flavor, in a portion of Lake Michigan. The trawling zone would extend from Kewaunee south to Sheboygan; Two Rivers is in the middle of the zone.

The public hearing regarding the rule change will take place at Lakeshore Technical College in Cleveland, Wisconsin. It begins at 6 p.m. Wednesday, Nov. 20. Although Seilheimer is unable to attend, Tom Meronek, the Wisconsin DNR’s northern Lake Michigan fisheries supervisor, who is based in Sturgeon Bay, will be there. Meronek will provide an overview of the project and share some of Seilheimer’s key findings.

The earliest the possible rule change would take effect is May 1, 2020.

Said Seilheimer, allowing trawling for whitefish—which, to this point, have been caught in the Two Rivers area by commercial fishermen using trap nets—provides a number of benefits. The rule change would be a boon to sport fishermen, too, since commercial trawling largely occurs during times when sport fishermen are not out. Furthermore, the lack of trap nets means a reduced likelihood of recreational anglers becoming entangled in commercial gear.

“Back when commercial fishermen were fishing with trap nets and couldn’t trawl for whitefish, there were up to 16 nets on Lake Michigan near Two Rivers,” Seilheimer noted. “So I think this simplifies things for everybody.” 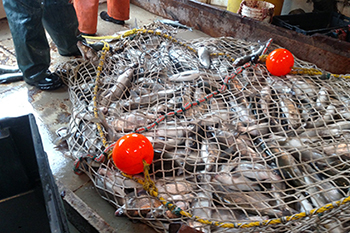 There is also a low rate of bycatch connected to whitefish trawling. “The fish we return to the lake make up only about 2% of the total catch, mostly small lake whitefish and lake trout. We’ve had very few sportfish other than lake trout through this whole study” that were unintentionally caught by the trawling, noted Seilheimer.

During the course of the study, Seilheimer spent 115 days total riding along with commercial fishermen so that he could collect data. It has given him a deeper appreciation for the physically demanding work they do. If the rule change does occur, consumers stand to benefit as well as commercial fishermen, in Seilheimer’s opinion: “A lot of people want to eat fish, and they want to eat local fish. Trawling means more fish harvested in the winter months when supply is usually low.”

While the ultimate outcome of the proposed rule change is not yet known—the public hearing this month is one more step in a lengthy process that also included a stakeholder comment period on economic impacts that ended in October—Seilheimer has found the study a rewarding experience.

“It’s a great Wisconsin Sea Grant/industry partnership that also involved working closely with the Department of Natural Resources. I think that at Sea Grant, we have this role where we can be that ‘in-between’ kind of group between industry and those responsible for managing natural resources. This is a good example of how that can really work well.”