Attendees at the 24th annual Wisconsin Aquaculture Conference not only heard a keynote from Steve Summerfelt, chief science officer at Superior Fresh, they dined on salmon and greens from the state-of-the-art aquaponics facility located in Hixton, Wis. Superior Fresh is the United States’ first land-based Atlantic salmon producer and the world’s largest aquaponics operation. It’s also a Wisconsin success story, one example from a growing aquaculture industry. 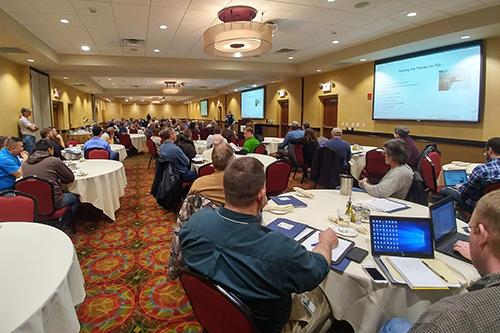 The conference, held Feb. 15-16 in Eau Claire, brought together current aquaculture producers both large and small, those looking to enter the field, journalists, researchers and others. The conference was co-presented by the Wisconsin Aquaculture Association and the University of Wisconsin-Stevens Point Northern Aquaculture Demonstration Facility (UWSP NADF), a national leader in aquaculture research. Roughly 155 people attended.

Before taking on his current role with Superior Fresh in 2018, Summerfelt directed aquaculture systems research at The Conservation Fund Freshwater Institute, based in West Virginia. Both Superior Fresh and the Freshwater Institute are currently involved in Sea Grant-funded research led by UWSP NADF. Other partners involved in the study are Riverence and Evaqua, sister companies located in Washington and Idaho, that produce trout and salmon commercially.

The study examines issues of fish health and fish flavor with regard to land-based Atlantic salmon production. The research is part of a package of $11 million in grants supporting 22 different aquaculture projects nationwide, announced last October by the National Sea Grant Office.

In his keynote talk, Summerfelt noted that 99.9% of the flow at the Superior Fresh facility is recycled, and that salmon produced there have a smaller environmental footprint than many other sources of protein, like beef and poultry.

Experts from the Wisconsin, Minnesota and Michigan Sea Grant programs spoke, as well as LaDon Swann, director of the Mississippi-Alabama Sea Grant Consortium. Swann, who also serves as the national Sea Grant aquaculture liaison, gave a broad overview of how Sea Grant as a whole is prioritizing support of sustainable, domestic aquaculture.

UWSP NADF, based in Bayfield, played a pivotal role as point of connection between the Wisconsin Aquaculture Association, Superior Fresh and other entities behind the conference. Emma Wiermaa, who works for both UWSP NADF and Wisconsin Sea Grant, helped organize the conference, as did UWSP NADF facility manager Greg Fischer.

Fischer presented data on several ongoing Sea Grant-funded research projects addressing questions about raising walleye and saugeye intensively. Fischer feels that walleye is poised for a bright future.  “We’re changing the future for aquaculture species with walleye. It will be the next big food fish for aquaculture in the Midwest, probably in the next five years,” he said.

Consumer opinions were a theme that arose several times during the day. Don Schreiner of Minnesota Sea Grant, who played a key role in bringing Minnesota representation to the conference, noted that aquaculture still needs to gain acceptance with some consumers.

Schreiner’s observations were echoed later in the day by Bret Shaw, a UW-Madison associate professor of life sciences communication who leads a research team investigating consumer attitudes towards Wisconsin farm-raised fish. Wisconsin Sea Grant is funding the study. Others on the research team include WSG Social Scientist Deidre Peroff and Professor of Fisheries Biology Chris Hartleb of UWSP.

While Europeans generally view aquaculture positively, Shaw said, a significant chunk of Americans have negative perceptions of the industry and prefer wild-caught over farmed fish. But that can change, noted Shaw, because research shows that Wisconsin consumers trust Wisconsin aquaculture producers. “Wisconsin fish farmers are well positioned to be trusted advocates for their own products,” stated Shaw.

Further research during 2019 by Shaw and his team will test a variety of social-media messages with consumers to gauge how they respond to various points about Wisconsin-farmed fish. 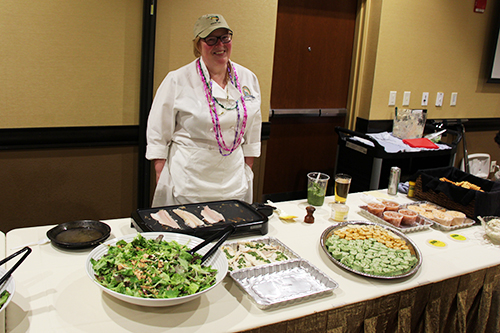 A “Taste of Wisconsin” reception capped off the day’s sessions on Friday. Here, Chef Dani Klontz of Safeway, Inc., stands ready to share a variety of tasty dishes with attendees. (Photo: Emma Wiermaa)

One theme touched upon throughout Friday’s portion of the conference was the importance of having an active association to benefit the health of the industry.

Paul Zajicek, executive director of the National Aquaculture Association and one of the conference presenters, said after the event, “The conference was one of the best state meetings I have attended, with considerable interest and enthusiasm demonstrated by the attendees.”

“The success of this conference was a direct result of strong collaborative efforts,” said Emma Wiermaa. “Not only did the Wisconsin Aquaculture Association work with UWSP NADF, but strong support was provided from Minnesota and Wisconsin Sea Grant and the North Central Regional Aquaculture Center to put on a very positive event.”

A wealth of conference information, including slides from many of the presenters, is available on the UWSP NADF website.

For more information about the Wisconsin Aquaculture Association or to join, visit its website.