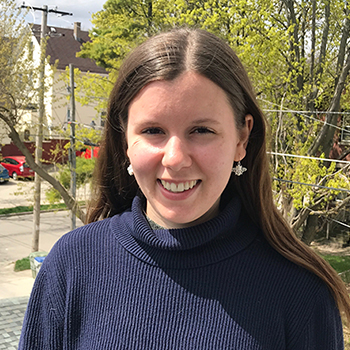 In 2008 when she was an elementary-school student, Gunderson’s family home near the Milwaukee River and Lake Michigan suffered damage during a large rainstorm that overwhelmed the city’s stormwater management system. She recalled the day: “My sisters and I put on our rain boots and raincoats to observe large, raging streams of stormwater flow past our house in the direction of the Milwaukee River. Instead of drawing the water down in, we watched as the sewers in our neighborhood bubbled up with sewage and contributed to the mess.”

The immediate aftermath was scattered, mucky debris and a buckled neighborhood bike path. Not long after the event, the toll the storm took on the house became evident—extensive cracks in the walls and ceiling were appearing because the structure was sinking. The floodwater had eroded the foundational fill.

That was a defining time for Gunderson and, years later, as she considered where to attend college and what studies to pursue, the flooding driven by a changing climate came to mind—providing a shape to her intentions. She enrolled at the University of Wisconsin-Madison to pursue a double major in geography and environmental studies.

Gunderson is now in her junior year and is the recipient of the 2020 Carl J. Weston Scholarship from Wisconsin Sea Grant.

“I am really enjoying my experience with Wisconsin Sea Grant. I’ve been progressing through a lot of opportunities,” Gunderson said. “It’s been amazing to be a part of a community that I didn’t even realize existed before this. The scholarship was a great thing on top of all of that.”

Her mentor, Sea Grant’s Associate Director for Extension David Hart, called out Gunderson’s “outstanding scholarship and work ethic.” He directed her projects when she was an Undergraduate Research Scholar and as a Sea Grant Community Engaged Intern last summer. Now, Hart is overseeing her efforts to complete resilience story maps as part of a Southeast Wisconsin Coastal Resilience project, refining the previous internship project that used the GeoPlanner tool to look at the components and costs of a theoretical green infrastructure project in Madison and enhancements to the green infrastructure section of the Sea Grant website.

Like that fluid water, Gunderson’s future following her 2022 graduation is not fully defined but she is confident it will include a continued dedication to climate change and Great Lakes issues through graduate studies. After that, she said, “I’m not sure at this point. However, working through these internships and now the student hourly position has let me see jobs that everyone else has. That’s been really helpful, to see the different career paths.”