The Wisconsin Wildlife Federation named Vicky and Hallet J. “Bud” Harris as conservationists of the year at a recent annual banquet. Both serve on Sea Grant advisory bodies — Vicky Harris serves on the Advisory Committee on Outreach and Education. She is also the retired water quality and habitat restoration specialist from Sea Grant. Bud Harris is on the advisory council and is a former chair of the body.

The Wisconsin Wildlife Federation is made up of more than 200 conservation groups, meaning it is the largest non-governmental agency in the state with a mission to promote conservation.

Keith Pamperin, chair of the federation’s Great Lakes Committee, nominated the Harrises for the honor. Pamperin is a longtime public servant in Green Bay, so he has a strong familiarity with Vicky and Bud Harris’s contributions to conservation of the bay of Green Bay, its surrounding wetlands and the open waters of Lake Michigan.

“Over the past 50 years, we have been fortunate to work with so many talented people dedicated to restoring and protecting Green Bay and Lake Michigan,” said Vicky Harris. “It’s not that our work is so extraordinary, we’ve just stayed the course for a long time.” 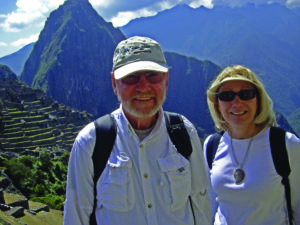 In addition to her role with Sea Grant, Vicky Harris worked for the U.S. Fish and Wildlife Service and the Wisconsin Department of Natural Resources (DNR), where she led efforts to protect and rehabilitate the Green Bay ecosystems.

Bud Harris enjoyed a 30-year career at the University of Wisconsin-Green Bay, where he taught environmental courses and mentored 15 graduate students, most studying some aspect of Green Bay coastal wetlands.

Through the university, he also kicked off Sea Grant’s Green Bay-campus-based subprogram. The subprogram’s research laid the groundwork for bay and wetlands restoration plans. Over the years Bud amassed a collection of more than 1,400 publications, reports and theses on the bay’s ecology, which is housed in the UW-Green Bay library archives.

“It is gratifying to see how foundational research can result in positive changes. However, in some cases it took 40-plus years for political will to catch up with the science,” Bud Harris said.

The pair worked with the Great Lakes Fisheries Commission, Great Lakes scientists, Green Bay resource managers and stakeholders to create an ecosystem restoration case study, which became the forerunner to the DNR Remedial Action Plan (RAP) for lower Green Bay and the Fox River. The plan was the first of 43 restoration plans in the Great Lakes basin to be approved and set the bar for stakeholder engagement, involving more than 100 people on eight technical and citizen advisory committees.

Vicky Harris helped lead public engagement and served as the DNR Green Bay/Fox River RAP coordinator for 10 years until joining Sea Grant in 1999. Bringing scientists, resource managers and community leaders together to tackle serious long-term environmental problems has been the hallmark of the Harrises careers. Even after retirement, both Harrises have remained active with Green Bay advisory committees and restoration projects to this day.

The efforts leading up to the Remedial Action Plan are only a part of extensive, and ongoing, involvement of the Harrises in northeastern Wisconsin, and wider, conservation work. Other highlights include:

“For as long as we’re able, we hope to continue pushing for restoration of this vibrant ecosystem so important to the Green Bay community and the Great Lakes region,” Vicky Harris said. “It’s encouraging to see the progress that’s been made, and the enthusiasm of the next generation of scientists and managers.”

“That’s great”, quipped Bud, “because at 85, I am beginning to look for a smooth landing field.”