While New Zealand white rabbits do not normally spring to mind when you mention the fauna of Lake Michigan, a recently published paper in Limnology and Oceanography: Methods, a journal of the Association for the Science of Limnology and Oceanography, shows how this cotton-tailed creature plays a role in a newly validated method for assessing the lake’s food web, along with yielding surprising finds about the feeding habits of invasive spiny waterfleas. 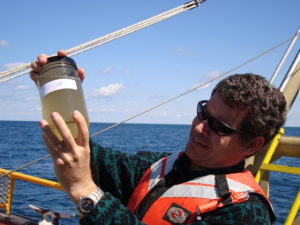 Sea Grant-funded researcher John Berges on Lake Michigan for a study of the effects of invasive zooplankton on the food web. (contributed photo)

He harkened back to the 1970s for a process first used terrestrially to calculate what’s eating insects and what kind of insects are being eaten. Berges said the technique had seen limited use in the marine environment but that “this is really the first time it’s been used systematically in fresh waters.”

Berges noted, “What we like about it as opposed to some of the DNA techniques is that it’s pretty quick. It’s cheap. You don’t need big deep DNA sequencing. Most labs will be able to use this.” Additionally, he said, scientists—such as the University of Windsor’s Aaron Fisk—who are using stable isotopes to map food webs can use this process to corroborate findings.

So far, there’s been references to fish and bugs. Just where do the rabbits come into the picture? Berges provided a detailed rundown of this “simple” process: “You take the likely prey (of a spiny waterflea) and…you grind it up. You basically homogenize it, make a soup of it. You take that soup and you inject it into an animal. We’re going to use a bunny rabbit here. That bunny rabbit’s immune system goes nuts, making a whole bunch of antibodies against the proteins that are in the putative prey organism. You have a huge array, a suite, of antibodies which now recognize the proteins that are in that item that potential prey item, that you injected into it.”

There is then a rabbit blood draw—after six to 12 weeks, during which time the immune response has built up. In the lab, Berges’ team then took the antibody (also known as immunoglobulin IgG) fraction of the blood, “which is real easy to do, and you have basically stuff, the immunoglobulins, which are going to stick very, very precisely to the proteins that were in that particular (prey) organism. So, you have a nice little marker.”

Berges continued, “We found a whole bunch of the predators and checked them out for 12 different prey and some of them we didn’t find. None of the predators had them and we can be pretty clear that the predators aren’t eating them. And other prey, almost everybody had some of the prey in them. Now, we have a fairly clear picture of what the spiny waterflea is eating and a couple surprises came out.” 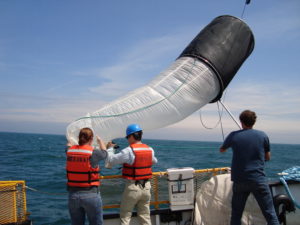 A University of Wisconsin-Milwaukee research team collects samples that will later be used as part of a “almost naively simple” method to assess an ecosystem’s populations. The represents the first time the antibody-based method has been used systematically in fresh waters. (contributed photo)

There were two surprises. First was evidence that the spiny waterflea was consuming the larvae of invasive Dreissenid mussels, commonly known as zebra mussels or quagga mussels. “That’s a neat story. We have one invasive species eating another invasive species. Well, that’s kinda cool. But we think about it a little more and it doesn’t make an awful lot of sense because we have this great big predator why is it grazing on these tiny little larvae,” Berges said.

The researchers continued with their reasoning and are now confident that it’s a case of what is known as hyperpredation—the spiny water flea ate something that itself first ate the larval Dressenid mussel.

The second surprise was a 180-degree turn in the category of size—not a tiny food source like the Dreissenid mussel larvae, but a large organism. Evidence of a type of zooplankton called Limnocalanus macrurus, or one of the “big dogs in the lake” as Berges put it, was found to have been consumed by the spiny waterflea. In this instance, Berges said they reasoned the spiny waterflea was eating the juvenile and larval forms of the large copepod.

In the end and with the help of a few New Zealand white rabbits as interim hosts for ground-up zooplankton prey, Berges said, “We have reasonable explanations for those two strange things that we found, and a technique that now we’ve proven out.”