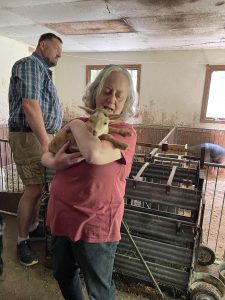 Campbell at her retirement party, holding a young friend.

The one and only Linda Campbell has retired–in July–from the Aquatic Sciences Center after 40 years at ASC and 49 total years working for the people of Wisconsin at the state and university level. Although we will never be able to quantify her immense contributions, we had to try.

Number of scientific symbols available on a current iPad app: more than 3,000

Number available on the Wang computer Campbell was hired to use for scientific manuscripts in 1982: 0 [One of Campbell’s main tasks was to insert scientific symbols into paper manuscripts.]

Newsletter names over 40 years: 3 [from the “Chocolate Doorknob” to the “Littoral Drift” to the “ASC Chronicle”]

Issues of newsletters mailed out:  approximately 400,000

Paperclips ordered: 3 billion [We did not count them.]

Average number of emails handled per week in Campell’s first few years: 0 [there was no email in 1982] 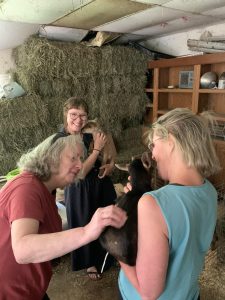 Campbell with Bonnie Willison and Elizabeth White at her retirement party.

Number of times a UW chancellor has made a surprise visit to deliver an award to a Sea Grant staff member: 1 [Campbell received the Classified Staff Employee Recognition Award in 2008 and the current Chancellor John Wiley dropped by to deliver it in person.]

Number of inexplicably huge cabinets at Sea Grant’s first location: 4 [They were chicken coops; the building was previously the poultry research building.]

Days during which Sea Grant staff was forced to use a ladder to enter basement offices in the “old Sea Coop” because of a cracked staircase: approximately 30

Quantity of doughnuts and other treats Campbell has offered to colleagues: more than 3,000

Number of times Campbell’s wonderful laugh has echoed through the halls, bringing joy to all who hear it: uncountable

–by Jennifer Hauxwell and Elizabeth White