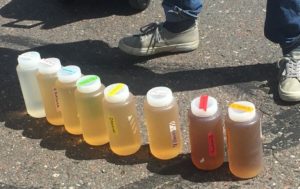 Water samples from the St. Louis River show differing levels and types of dissolved organic matter, from near the headwaters (on the right) to Lake Superior (on the left). Submitted photo.

Water that forms the beginnings of the St. Louis River in northern Minnesota percolates through moldering plants in remote wetlands and bogs. All this peaty goodness turns the water brown, as if the mythical giant Paul Bunyan squeezed it through his tea bag.

Along its 190-mile journey from Seven Beaver Lake into Lake Superior, this dissolved organic matter in the water is diluted until, when the water reaches Lake Superior, the color clears and it more closely resembles the rain and groundwater sources that were its beginnings.

Researchers funded by Wisconsin Sea Grant have found that various amounts and types of dissolved organic matter (also known as organic carbon) combined with sunlight can break down different pollutants in the St. Louis River. The research team was headed by Christina Remucal, University of Wisconsin-Madison, and Kristine Wammer, University of St. Thomas.

They focused on four pollutants: the insect repellant DEET, the cholesterol-inhibitor atorvastatin, the antidepressant venlafaxine, and the anti-epileptic medicine carbamazepine.

They chose to study the St. Louis River because of the variety of organic matter along its course. Remucal explains, “The headwaters are full of wetlands and all the organic carbon is really terrestrial – coming straight from plants. Then as you move into the estuary itself, there’s more of an anthropogenic influence as well as wastewater effluent. Once you get out into Lake Superior, the quality of the organic matter is quite different.”

Their findings are detailed in the Sept. 11 issue of “Environmental Science and Technology.”

“We saw better removal of DEET higher up in the watershed because it has more terrestrially derived organic carbon,” said Remucal. “On the other hand, down near Lake Superior, which has more wastewater-derived or microbially derived organic matter, we saw more degradation of atorvastatin, carbamazepine and venlafaxine.”

Their findings have implications for wastewater treatment and water management both in the estuary and beyond and could be used to direct and prioritize remediation. 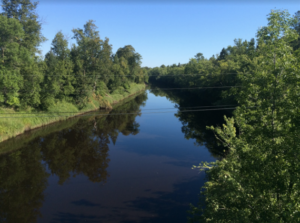 In the lab, the researchers added a pollutant to a water sample, then exposed it to light. “Every so often, you’ll turn the light off or take your sample out and collect another sample from it,” Remucal said. “You can watch the chemicals degrade as you shine more and more light on it.”

Indirect photolysis works because sunlight exposure causes the dissolved organic matter to produce highly reactive molecules called radicals. The radicals have unpaired electrons that want to pair up. They react with the four pollutants in the study and end up degrading them in the process. 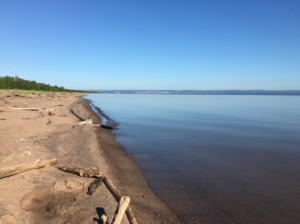 The researchers were able to measure these changes with a state-of-the-art mass spectrometer at the UW-Madison Medical School, which was a first for this type of research. “We showed that different kinds of organic carbon are better at producing these different radicals. That was something… no one had ever shown before,” Remucal said.

The team plans to apply this approach to an additional study funded by the National Science Foundation. “We want to see if the relationships we found are universal,” Remucal said. “Besides the St. Louis River, we’re going to work in lakes in northern Wisconsin, down here in Madison, also some agriculturally impacted sites in Minnesota and more urban sites around Minneapolis.”