Reducing mercury pollution to lakes can lower methylmercury contamination in fish within just a few years according to research reported today in the online version of the journal Nature. The findings suggest efforts to control mercury emissions can reduce the risk of human exposure through fish consumption.

Mercury released because of human activity can find its way into aquatic ecosystems, where it is converted into methylmercury, a potent neurotoxin that accumulates in fish and poses a health threat to humans. There is limited understanding of the effectiveness of controls on mercury emissions in removing methylmercury from the food chain. 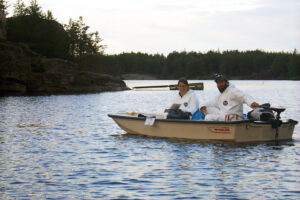 A 15-year study on the effects of mercury control efforts on the recovery of fish contamination was conducted on a remote, undisturbed Canadian lake and its watershed. Wisconsin Sea Grant Director Jim Hurley was part of the research team that also included scientists from binational regulatory agencies and other academic institutions in the U.S. and Canada.

“This study shows the value of long-term multi-disciplinary, consistent research. We were able to observe the impacts of both an increase and decrease in contaminant loading over several years. Both showed rapid responses in the chemistry and biology of the lake and its watershed,” Hurley said. 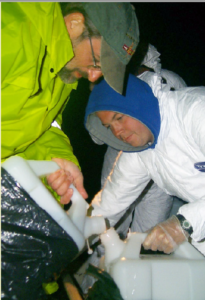 Jim Hurley (left) and Todd Kuiken, Canada Department of Fisheries and Oceans, homogenize the mercury isotope solution to ensure the carboys on each boat have the same concentration. Photo: Chris Babiarz

This whole-ecosystem experiment for seven years supplied specific isotopes of mercury to the ecosystem. During this period, the researchers recorded an increase in the uptake of this isotopically labelled mercury as methylmercury in the fish. Methylmercury concentrations increased by 45–57% in invertebrates (plankton, for example) and small fish (such as yellow perch), and by more than 40% in large fish, such as pike and whitefish.

Then, mercury additions ceased and the effects on the food chain were observed for eight years. Labelled methylmercury quickly diminished in the smaller fish, with concentrations dropping by at least 85% by the end of the study period. This triggered a subsequent reduction of labelled methylmercury in the larger fish, with concentrations declining by 76% in pike and 38% in whitefish.

The rapid reductions in methylmercury contamination observed in these experiments demonstrates the potential for mercury emission controls to improve the safety of fish for human consumption, the authors concluded.