One of the barriers to developing an aquaculture industry around yellow perch—popular in Wisconsin for its starring role in fish fries—has to do with columnaris disease, caused by Flavobacterium columnare, a naturally occurring bacterium affecting both wild and farmed freshwater fish.

Wisconsin Sea Grant-funded researchers have spent several years gaining a deeper understanding of F. columnare and working towards a vaccine that could prevent columnaris disease in farmed fish—and not just yellow perch, but other freshwater species as well.

In Sea Grant’s 2020-22 research cycle, professors Mark McBride and Jhonatan Sepulveda Villet of the University of Wisconsin-Milwaukee and David Hunnicutt of St. Norbert College in De Pere are joining forces to understand just how F. columnare wreaks its damage.

“This is one of the top disease-causing organisms for freshwater aquaculture anywhere in the world,” said McBride, a microbiologist in UWM’s Department of Biological Sciences.

One of his discoveries—made in tandem with a group in Japan approaching the same problem from a different angle—is that many bacteria in the Flavobacterium family have a novel way of secreting proteins out of the cell. F. columnare’s secretion system is, it seems, a key to combating the disease it causes.

In earlier work that McBride and Hunnicutt conducted together, they found out that F. columnare’s secretion system secreted at least 40 different proteins from the cell, some of which were suspected to be involved in virulence, though it was not yet possible to determine which of those 40 proteins was the culprit. 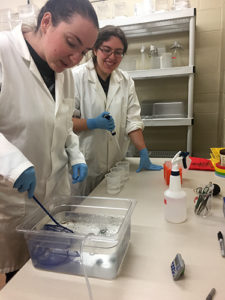 At the University of Wisconsin-Milwaukee, graduate students Nicole Thunes and Rachel Conrad assist with the research. (Submitted photo)

What they did find, however, was that knocking out the secretion system and creating a “mutant” without it made the bacterium unable to cause disease in fish.

Part of the current research focuses on which of those several dozen secreted proteins are the important ones in causing disease.

The secretion system also performs at least one other critical function: it helps F. columnare move, crawling over surfaces with a treadmill-like system. “These bacteria move kind of like a tank,” said McBride, “with moving treads along the surface of the cell.”

As he summarized, “The secretion machine has two jobs: it secretes proteins out through the cell surface, and it’s also the motor that moves those treads along the cell surface. Both may be needed to cause disease in the fish.”

Hunnicutt, the St. Norbert biology professor, brings expertise in fish and fish immunology and has known McBride for years, having completed a postdoctoral fellowship in McBride’s lab. Experiments for the current Sea Grant project will take place at both UW-Milwaukee and St. Norbert College.

Sepulveda Villet, an expert on yellow perch aquaculture at UW-Milwaukee’s School of Freshwater Sciences, also plays a critical role in this work. In Milwaukee, McBride and Sepulveda Villet have the assistance of graduate and undergraduate students, and in De Pere, this work has proven to be a prime learning opportunity for Hunnicutt’s many undergraduates.

Said Hunnicutt, “I have run three immunology lab courses using the vaccine trial as our central project, meaning something like 70 students have been exposed to the immunology and microbiology of aquaculture almost without knowing it.” 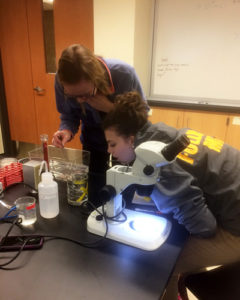 Continued Hunnicutt, “A lot of my students are interested in [human] medicine and want to do infectious disease research, but they’re undergraduates.” Working with fish gives them a safe chance to get their feet wet because none of the disease-causing systems they encounter in Hunnicutt’s lab will cause illness in people.

Funding from the U.S. Department of Agriculture (USDA) is also playing a role in the research because USDA—like Sea Grant—has an interest in research that aids the U.S. aquaculture industry. With that additional funding, similar experiments will be performed using rainbow trout.

USDA research scientist Brian Shepherd serves as the principal investigator for the rainbow trout work, with McBride as a cooperator, in the agency’s terminology. “The USDA and Sea Grant-funded projects are dovetailing,” said McBride. “There’s a synergism between them.”

That synergy stands to benefit the aquaculture industry broadly, recognizing that there may be differences in how bacteria interacts with one type of fish versus another, given the varying temperatures at which fish species grow and other factors.