Sea Grant won two communications awards in an international competition sponsored by the Council for Advancement and Support of Education, an association that shares strategies and tactics to engage alumni, donors, prospective students, parents, government officials, community leaders and those in the private sector to support education. 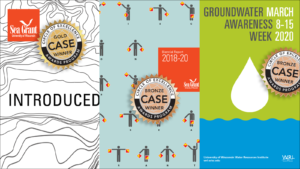 The podcast series Introduced, produced by Bonnie Willison and student Sydney Widell about aquatic invasive species, won a gold award. Judges said, “We loved that the hosts reported their stories by finding interesting leads and then going into the field to investigate and interview the people involved…The back-and-forth between the hosts is comfortable and welcoming, and there’s good use of music throughout.”

The 2018-20 Sea Grant biennial report won a bronze award. The report was designed by Yael Gen, edited by Elizabeth White and written by Moira Harrington. Judges said, “Such a fun and creative design! The signal flag theme and visual identity are smart and unusual, and we agree with the nominators that the design captures the zeitgeist of this time period. Rough waters indeed! The graphic elements added inside flowing type are hard to pull off, but pull them off they did, creating something that’s not just visually interesting but rewards the viewer upon their closer inspection. For not being able to commission photography, they have done a wonderful job of creating visual excitement on each layout; it’s like a master class in how to get around COVID photography restrictions.”

The competition drew 2,957 entries from around the world, including from prestigious Ivy League schools and respected international institutions.