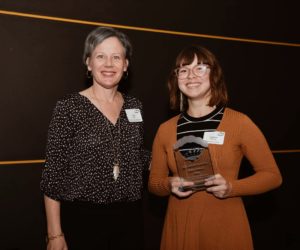 The group presents WAVE Awards, which honor excellence in web, audio, video and graphic design and it received dozens of entries, including materials created for international and national entities like the BBC, Hulu, American Family Insurance and CUNA Mutual Group.

“It was an honor to receive recognition for this video,” Willison said. “George was a pleasure to interview, and I’m glad I was able to share his charming and inspiring stories through the Voices of the Coast project.”

A video called Voices of the Coast: George Schmidt garnered awards for editing and the Judge’s Choice, one of only three conferred. The judge termed the video “astounding” and said, “This reflects a strong female creator to film, edit and create graphics that succinctly work together on this piece.”

The judge concluded, “I’m proud to give my judge’s choice to this recipient and am excited to see the other work she…will create.”

Voices of the Coast is a series that tells the stories of individuals who live, work and recreate around the Great Lakes. Their experiences provide a lens for larger topics that touch on the lakes such as social justice, fisheries and conservation. The full series can be found here and it’s an ever-expanding catalog of offerings.

The winning video focused on George Schmidt is a light-hearted profile of the Mountain, Wis., resident who is a folk artist crafting wooden decoys for those who participate in the state’s annual sturgeon harvest. Wisconsin is the only Great Lakes state that has done such a successful job of maintaining its sturgeon population that sportsmen can participate in an open season. 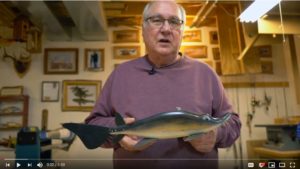 Sturgeon decoy carver George Schmidt was profiled in the award-winning Voice of the Coast video that one judge termed “astounding.”