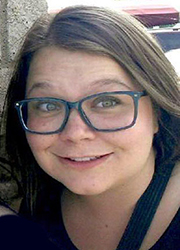 With its clusters of colorful flowers, purple loosestrife is pretty—but it is no friend to Wisconsin landscapes. The invasive species is unwanted here because it competes with native wetland plants and provides no nutrient value to native animals.

Purple loosestrife (also called Lythrum salicaria) can grow up to seven feet tall. Its height and color are why some use it as an ornamental garden plant and one possible reason it was brought to North America from Europe, where it is native. However, it is not legal to have in Wisconsin, and there are similar-looking, native alternatives to putting purple loosestrife in your garden.

This summer, Wisconsin Sea Grant’s Molly Bodde is engaging in preliminary work to start a program to control these invasives in a chemical-free way, using beetles that eat the purple loosestrife.

Bodde is the aquatic invasive species (AIS) coordinator for southeast Wisconsin. Based in Kenosha County, she is modeling her work on a similar program currently run in Washington County under the direction of Washington/Waukesha County AIS Coordinator Cassie Taplin.

If all goes as expected, Bodde will be ready to expand her activities next year with help from community members who want to do their part to knock back the occurrence of this unwanted invader. 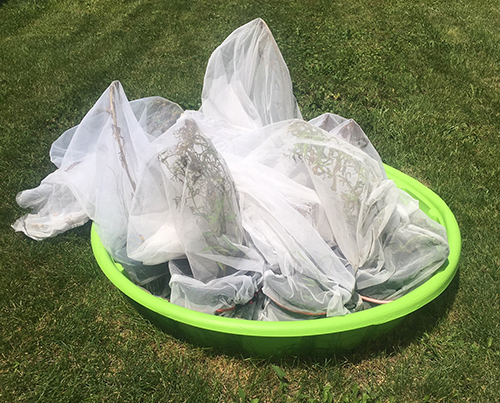 Purple loosestrife and the beetles that eat the plant are contained under netting in a kiddie pool. (Photo: Molly Bodde)

Bodde was able to get purple loosestrife-eating beetles from Norb Yoegerst, who works with Washington County 4-H. The aim is to get beetles before they lay their eggs. By placing the beetles in a small, controlled area of purple loosestrife—Bodde has hers in a kiddie pool, covered by a net–“They’ll eat the plants, and then their larvae will hatch and also eat the plants,” explained Bodde.

“Then you take the mostly eaten plants in the netting and place them in a stand of purple loosestrife in the wild. The beetles will overtake that as their food source until it’s basically gone.”

Even when the introduction of the beetles does not entirely kill purple loosestrife out in the wild, controlling the plant does become easier. “It at least reduces the size it comes back the next year and makes it a lot easier to manually remove,” said Bodde. “It’s a way to knock back the stands of purple loosestrife to make them more manageable without using chemicals.”

This invasive plant is currently found in all 72 Wisconsin counties. “It’s more hardy than our native species, so it will take over, especially along shorelines and the sides of roads,” said Bodde. “You can sometimes see it when you’re driving along the highway.”

Bodde is also getting guidance from Brock Woods of the Wisconsin Department of Natural Resources (DNR) and University of Wisconsin-Madison Division of Extension as she develops her game plan for southeast Wisconsin. Woods is the statewide coordinator for purple loosestrife management activities.

While anyone can cultivate beetles to help knock back purple loosestrife, one must obtain permits in order to have the plants themselves, since they are on the DNR’s list of restricted plants.

If you have questions or would like to get involved in Kenosha County, contact Molly Bodde at molly.bodde@aqua.wisc.edu or 608-890-0977.