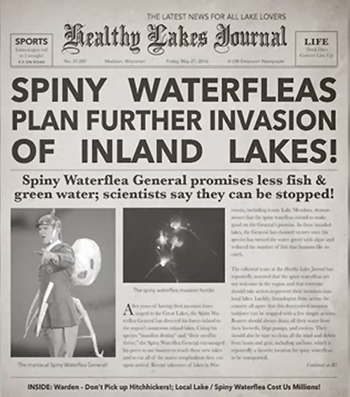 A screenshot from the “Stop the Spiny” video.

Then, viewers meet the spiny water flea character himself, styled as a military general in a spiked helmet, his spiky tail poking through his uniform. He barks in a high-pitched yet menacing tone about his plans for invasion.

While this approach may be an unorthodox way to communicate science and promote sustainable boating practices, it grabs viewers’ attention, said Tim Campbell. Campbell is an AIS outreach specialist for Wisconsin Sea Grant and the University of Wisconsin-Madison Division of Extension.

He noted that the video, viewable at StopTheSpiny.com, is one of Extension’s most viewed over the past five years. He worked on it with Bret Shaw, an associate professor of life sciences communication at UW-Madison, and their collaborators Amulya Rao and Jenna Klink, who are evaluation specialists with Extension.

The video production team sought not only to share information about a pressing issue—the presence of a particular invasive species in Wisconsin and simple, effective tactics to stop its spread—but also to test various strategies for reaching boaters.

The Journal of Extension published the team’s findings earlier this summer. The article, “Evaluating Promotional Efforts for Driving Traffic to an Extension Outreach Website,” is available on the journal’s website.

Said Campbell, who travels frequently to make presentations, the analysis of communication techniques provides a useful framework for thinking about face-to-face versus online communication.

“I was thinking about this in terms of an Extension person who might not bat an eye driving two hours one way to talk to 15 people about a topic—and yet, from my desk in an hour with around $30, I could get 100 people to visit a website and get the same information” by buying Facebook ads, said Campbell. 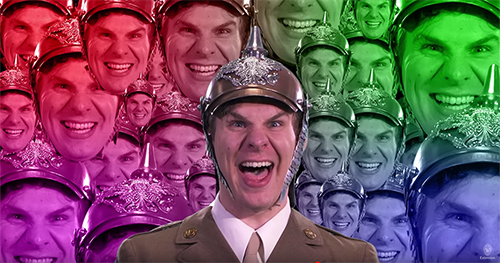 The spiny water flea general gleefully describes his invasion plans in this screenshot.

Campbell cautioned that this is not to discount or minimize the importance of face-to-face interaction and building relationships with communities and stakeholders. The give-and-take of in-person events remains vital. Yet, as online communication becomes increasingly important for Extension professionals, the study illuminates best practices for ensuring those online messages make an impact with their intended audiences.

What did the team find? One takeaway, in Campbell’s words: “If you have really good creative”—in this case, an entertaining, unconventional video—“you can achieve a pretty low cost per individual to reach someone through earned media and organic reach.” In marketing terms, earned media refers to non-paid coverage of a topic (for example, a newspaper story about the “Stop the Spiny” campaign), and organic reach refers to the number of people who will come across online content without being led there by paid advertising (for example, if you have a Facebook friend who reshared the “Stop the Spiny” video on their page.)

What’s more, there are a variety of tactics one can use – including targeted online advertising – to keep viewers interacting with the content over time, as initial buzz tapers off.

While Campbell hopes viewers learned plenty about the spiny water flea, a European invader who hitchhiked here in the ballast water of cargo ships, he’s also heartened by what the team learned producing the video.

Communication methods that seem “free,” like staff presentations or coordinated media pushes, do carry costs in terms of staff time, gas and the like, while methods that require more up-front cost, such as video production, can be quite reasonable in the long run in terms of people reached.

To read the journal article by Campbell, Shaw, Rao and Klink, visit the website of the Journal of Extension.