Sampling for round gobies on Lake Michigan can be unpleasant because you can be handling slippery fish and often braving cold, windy and choppy lake conditions. But at least fish don’t sneeze on you.

Cheetahs do. If you are Erik Carlson, you’ve known the discomforts of both those experiences thanks to graduate work and now a job that brings contact with all sorts of animals.

Carlson wouldn’t have traded away either experience, though. The round goby research provided a solid academic grounding and his research team validated the theory that the fish are migrating to deeper waters in colder months.

His research team was led by his adviser, John Janssen at the University of Wisconsin-Milwaukee School of Freshwater Sciences. Carlson said, “John has a wealth of knowledge about the Great Lakes. I learned a lot from him. I sampled with him and also assisted in teaching some of his classes.” 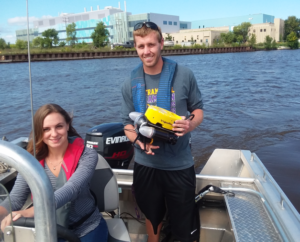 Erik Carlson with a fellow student, docked alongside of the University of Wisconsin-Milwaukee School of Freshwater Sciences, where he received a master’s degree in freshwater sciences. Contributed photo.

Carlson is now the life support technician for the Milwaukee County Zoo. It’s a newly minted position for the venerable zoo and is due to, “The director, who wants to modernize and update exhibits. He has done a good job,” said Carlson, whose main responsibility is the complex water filtration system that is part of the $13.5 million Hippo Haven, which opened in February. As an undergraduate student, Carlson worked a stint in commercial aquaculture, so he knows his way around pumps and operating aquatic-organism habitats.

Where does the cheetah come in? “This is a really interesting job. It’s nice to go behind the exhibits. Being with the zookeepers, I’ve been close to animals. I’ve had a cheetah sneeze on me,” Carlson said.

He also manages the water quality for the Lake Wisconsin and otter exhibits, as well as a Pacific coast installation that features an octopus.

Carlson has been keeping the hippos happy in their underwater-viewing exhibit since joining the zoo 10 months ago, following his December 2019 graduation with a master’s degree in freshwater sciences. Most recently prior to that, he worked on a Sea Grant-funded project, “Seasonal Depth Distribution of Round Goby in Lake Michigan, Emphasizing Cold Seasons,” with Janssen as the lead project investigator and in collaboration with the Wisconsin Department of Natural Resources, U. S. Geological Survey and U.S. Fish and Wildlife Service.

While not as charismatic as the African beasts known as river horses, round gobies make up for their questionable appeal in numbers. These three-to-six-inch invasive fish reproduce very quickly—up to six times per summer—in Great Lakes waters. Carlson and Janssen conducted sampling on the Milwaukee slice of this extensive population from 2017 to 2019, considering whether or not, through their seasonal distribution, they could provide a food source for brown trout and burbot who inhabit deeper offshore waters.

Round gobies were first detected in Lake Michigan in 1994. They likely hitchhiked in the ballast water of oceangoing ships from Eastern Europe. Because they are mainly a coastal species, their movement offshore into deep water was not anticipated early in the round goby invasion. Yet, there was anecdotal information that deep-water migration was happening in the colder months of the year.

To check it out and because of the fish’s preference for rocky habitat, traditional trawl sampling was prohibitive. Janssen posited the use of a remotely operated vehicle (ROV) equipped with a tracking system that could observe the number of round gobies along transects. This was coupled with specimen collection for diet and aging investigation. Sampling and ROV observation took place in all seasons except December, January and February.

“The coolest thing about the project was using the ROV to actually see the bottom of the lake. It was a unique opportunity and a different way of sampling,” Carlson said.

Their findings bore out the news of interest, confirming that round gobies were in the same spot as brown trout and burbot at certain times, offering the larger sport fish another prey option. “These bottom-dwelling round gobies are delivering energy to the lake. Fishermen would like to know that,” Carlson said. 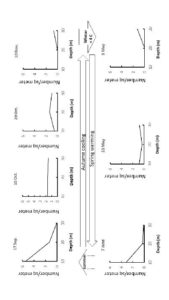 A submitted illustration depicts depth and date configurations of round gobies near Milwaukee. The nonnative fish concentrate in deeper waters during the fall and move to shallow depths during spring warming. Those cooler-weather locations mean more interaction with potential prey fish, like brown trout.

The research team also presented the findings with implications for the Lake Michigan food web to the Great Lakes Fisheries Commission, the U.S. Fish and Wildlife Service and through a session of the International Association for Great Lakes Research 2019 conference.