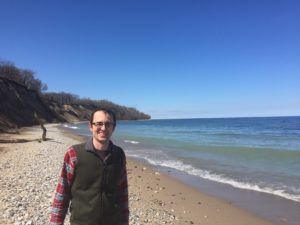 “Gene and I spoke last week and I teased that he picked a time to retire just when things were getting rough,” Bechle said. “I’m excited to continue some of the projects he was working on and to add new ones into the mix.”

Bechle, who began his new job on June 1, spent his academic career at the University of Wisconsin-Madison Department of Civil and Environmental Engineering, progressing from a bachelor’s degree, to his master’s and ultimately, a Ph.D. His specialties include digital imaging techniques for measuring coastal process, and the occurrence and behavior of meteotsunamis (single wave fronts generated by squalls) on the Great Lakes.

He has worked for Sea Grant and the Wisconsin Coastal Management Program before, as the first J. Philip Keillor Science Policy Fellow in 2016, where he used his technical skills on water issues and received science-policy experiences from resource professionals who served as mentors.

In his new job, Bechle is mentoring the latest Keillor Fellow as well as working on a coastal resilience grant from the National Oceanic and Atmospheric Administration to help communities on Lake Michigan plan for coastal hazards. In addition, he’s packaging a ports and harbor marina asset matrix and dredging cost estimator tool that Clark began so that it can be shared.

“I’m also working with a team on a property owner’s guide to protecting your bluff, which looks at different parts of a bluff and identifies issues and opportunities to increase bluff stability,” Bechle said. “Also, many property owners and municipalities contact Sea Grant with issues related to coastal engineering. Although I don’t have time to work in detail with everyone individually, I’m trying to point them in the right direction and give them resources to look at and things to consider. So far, that’s been keeping me busy – there’s been a pretty steady stream of people looking for assistance with flooding and erosion.”

He is looking forward to picking up on his previous work with meteotsunamis and rip currents.

With Bechle’s hire, the coastal engineering position moves from the Lake Superior Field Office in Superior to Madison. The Superior Office recently hired an outreach specialist (more information on that is forthcoming) who Bechle anticipates will plug into coastal concerns in Superior and pass that information on to him when needed.

Bechle feels like he’s come full circle now. He first met Clark in 2007 when Clark spoke in one of his classes. “I didn’t know what coastal engineering was or what Sea Grant was back then,” Bechle said. “But I remember thinking that Gene really had an interesting job. He knew so much. I never thought I would have his job someday.”