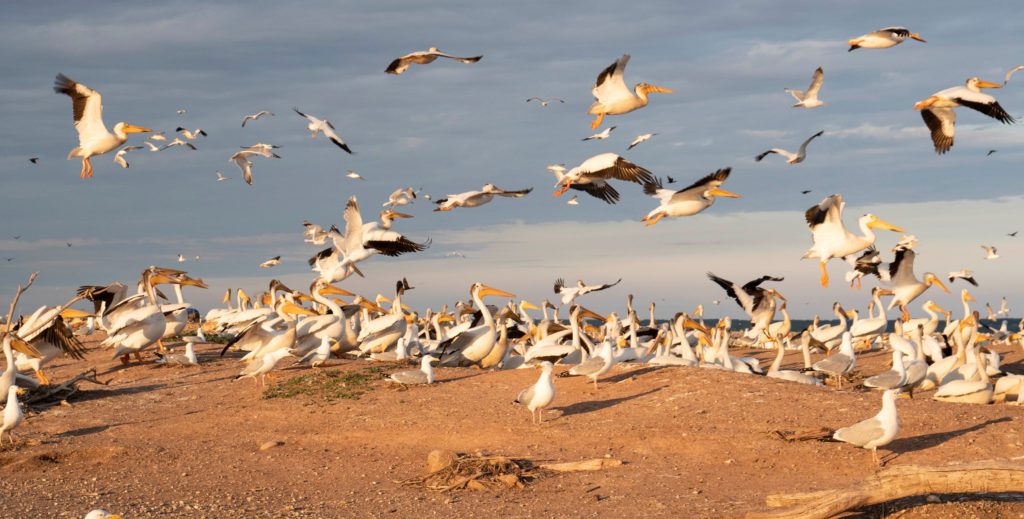 When Amy Wolf and Bob Howe with the University of Wisconsin-Green Bay bring new research partners or students out to the restored Cat Island chain in lower Green Bay on Lake Michigan, their reactions are memorable.

“To see people’s expressions when they enter the midst of thousands of loud, often smelly and sometimes defecating birds is pretty amazing and gratifying,” said Wolf, biology professor with the Department of Natural and Applied Sciences.

This avian abundance is relatively new, made possible by habitat restoration projects in the bay coupled with pollution remediation and control. For instance, the number of American white pelicans nesting has increased from about 250 in 2005 (State of the Bay report), to more than 3,000 now.

Wolf and Howe are coordinating a small army of students and government agency researchers to count and observe the behavior of birds that eat fish (piscivorous birds) in the lower Green Bay area around Cat Island, an area that Howe likens to the “Serengeti of Lake Michigan” due to the sheer abundance of wildlife. With two years of funding through Wisconsin Sea Grant, they are working to gain basic information about populations of pelicans, cormorants, terns, egrets, herons and gulls in the lower bay, including information about what the birds eat and where they spend their time. 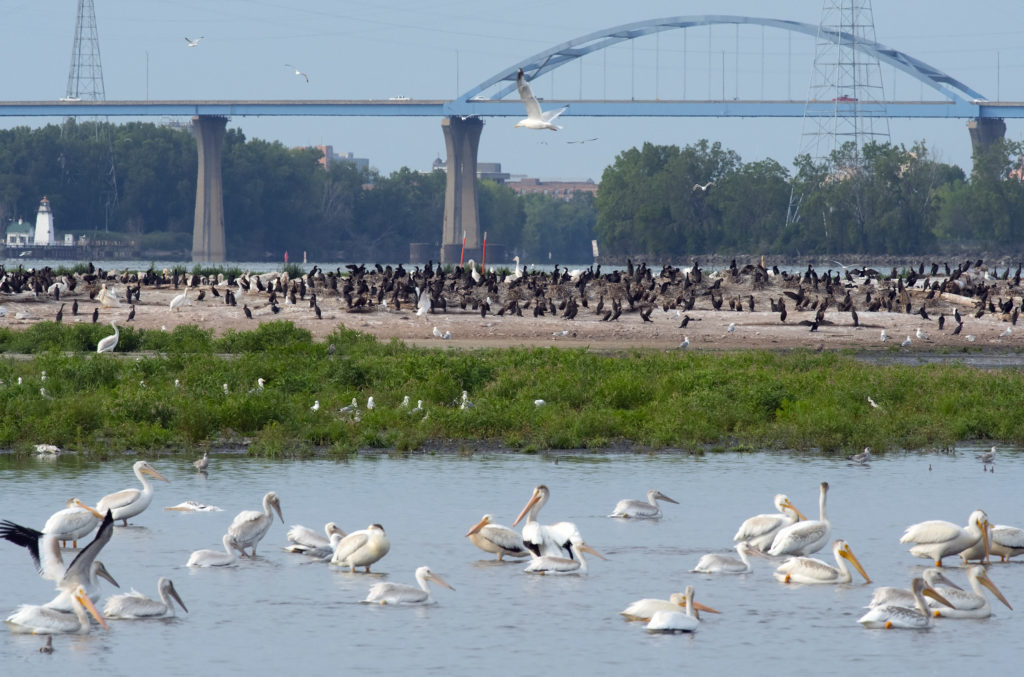 Howe, professor and director of the Cofrin Center for Biodiversity, explained, “We want to know what impact these large numbers of fish-eating birds have on the lower Green Bay ecosystem in general, and specifically on the fishery, which is so important for public recreation and commercial harvesting.”

Every two weeks during the spring and summer, Howe, Wolf, UW-Green Bay research specialist Erin Giese, and a team of undergraduate and graduate students surveyed all the piscivorous birds from southern Door County down to the DePere Dam on the Fox River, and then up the lakeshore to Oconto, Wisconsin. Graduate students Jacob Woulf and Brandon Byrne flew drones down the Cat Island causeway to count the thousands of birds there. Additionally, the students conducted firsthand observations of what the birds eat, where they catch fish and what other bird species they associate with.

In concert with the bird surveys, Howe said the U.S. Fish and Wildlife Service is conducting fish surveys in the lower bay.

“We’re learning about what kinds of fish these birds are taking and where they’re taking them,” he said. “We’re really excited about this information so far.”

They are also tracking double-crested cormorants with two types of technologies: one uses the cellular phone network and the other uses radio telemetry. For the cellular tracking, the birds are fitted with a lightweight harness that contains a solar-powered transmitter. The device provides information about a bird’s position every hour, even if it leaves Green Bay.

Birds with the radio transmitters are tracked through special towers stationed around Green Bay and in a growing network across eastern North America. They plan to track pelicans next year.

The researchers are only beginning to crunch numbers from their first season of data, but Howe and Wolf already have preliminary findings to share.

In terms of tracking, they’ve found that some of the cormorants move much farther than they anticipated. Wolf said, “They hang around Cat Island, they feed around Cat Island, but they definitely range widely; one bird flew 75 kilometers south to Lake Butte Des Morts and returned to Green Bay during the same day. Another went over 110 kilometers north toward Gills Rock, where it stayed for days before returning to lower Green Bay.”

Their feeding observers have noted that the cormorants and pelicans are foraging with each other. Howe suspects their social nature might be why they are the dominant piscivorous species in the Green Bay system. “Social foraging behavior might give them a leg up on exploiting the fish in the lower bay.”

Howe said their counting surveys have provided a good estimate of how many piscivorous birds are in lower Green Bay. By mid-summer 2021, well over 4,000 pelicans and 2,000 cormorants were present.

They’ve also noted that pelicans, and cormorants to a lesser extent, have developed a relationship with recreational fishermen. The birds hang around the boats and feed on fish that the fisherman don’t want and throw overboard.

“The pelicans have learned there’s free food there,” Howe said. “We didn’t anticipate this relationship and it’s very obvious from the data that we’re seeing.”

They expect their research will be helpful for agencies working on management decisions about the abundance of piscivorous birds, including gulls. 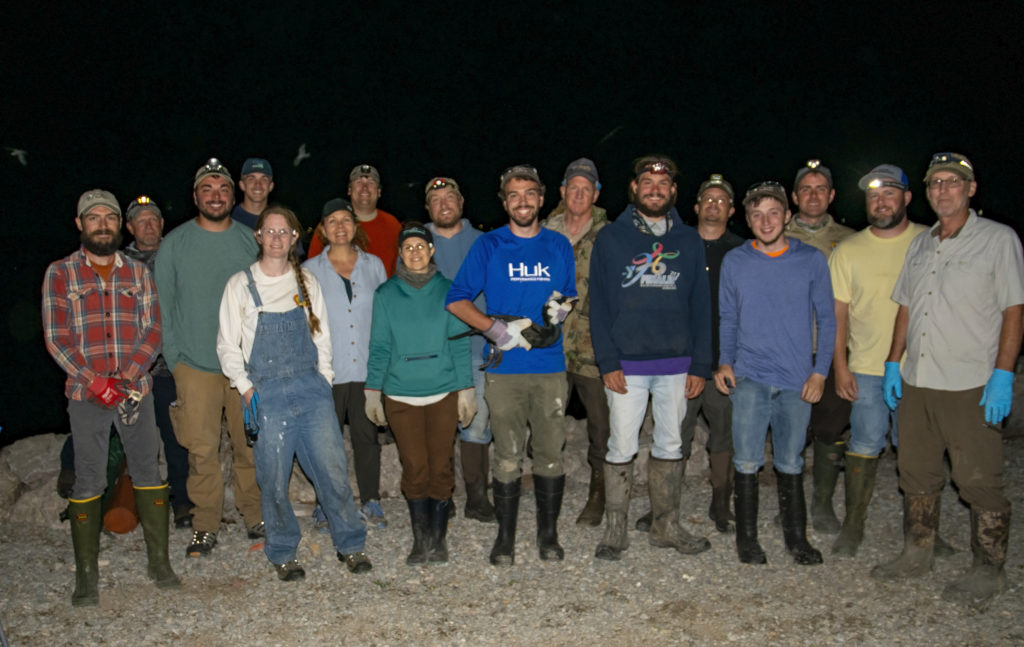 The bird banding crew on Cat Island. The person in the center is holding a cormorant. Image credit: Bob Howe, University of Wisconsin-Green Bay