Although a Buddhist practice known as “life release” may not be a widespread activity in the United States, it can have environmental implications when it does occur. In this practice, an animal that would otherwise be killed is saved and often released, with the hope that it will live out its natural life span. This act of compassion is considered to bring spiritual merit to the person who releases the animal. 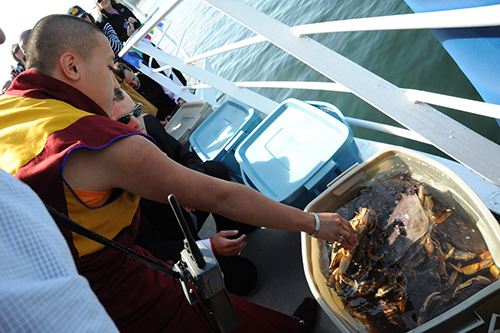 In this 2008 photo taken in Canada, a crab is selected for life release. (Photo: Flickr user Wonderlane)

While the practice is not limited to a particular type of animal, in some cases it means that fish, crustaceans or other water-dwelling creatures are released in areas where they are not native, causing unintended impacts on local ecosystems. While this is well documented in some Asian countries, little is known about the practice in North America.

Current research seeks to develop a better understanding of this practice in the U.S. and provide guidance to natural resources managers. The research is supported by the Mississippi River Basin Panel on Aquatic Nuisance Species, the University of Wisconsin-Madison Division of Extension and Wisconsin Sea Grant. At Sea Grant, it falls under a broader portfolio of “closing aquatic invasive species pathways” efforts.

The intent is a “win-win” outcome: those who practice life release as part of their religious activities can continue to do so, while the spread of invasive species is avoided.

One output of the team’s work will be print resources for natural resource managers. Available this fall, those resources will help managers understand life releases practices and ensure they are performed in a manner that entails little to no risk of spreading AIS, while also respecting religious and cultural traditions that may be new to them.

This work addresses a need voiced by natural resources managers, said Campbell. “They’d heard about this practice occurring and, since little was known about it, it’s something they became concerned about,” he noted. “They were interested in having someone investigate this topic before taking any action, and Bret and I jumped at the opportunity to help managers better understand the practice.”

Sara Fox, a graduate student working for Extension, did significant legwork to establish connections with possible practitioners across the United States. Fox contacted more than 200 Buddhist temples, as well as Buddhist study programs and student groups. Because there are many different Buddhist traditions, some of those contacted were not familiar with life release, while others had heard of it but said that their temple or organization did not practice it.

For those who do participate in life release, there is no single way to go about it: it can be spontaneous or part of a larger group ceremony, and it does not always entail releasing animals into the wild.

Campbell and graduate student Peter Jurich have been interviewing people who practice life release. Said Campbell, “Almost everyone has said they don’t want to release things if they know they’ll die right away, or if they know it will cause an environmental problem. So people are thinking about the issue.”

The research team will also survey natural resources professionals around the country. Together, the information gathered from them and from life release practitioners will shape the resources that will be available this fall.

Campbell is optimistic that the risks of this pathway can be minimized. Said Campbell, “The people who are practicing life release would welcome engagement from natural resource professionals in order to make sure their practices are environmentally friendly and compliant with the law.”