Jordan Murray is no stranger to the effects of harmful algal blooms (HABs). A native of Toledo, Ohio, she vividly remembers the period in 2014 when a major bloom in Lake Erie meant that residents were warned not to drink—or even touch—the water coming out of their taps. No cooking with it, no bathing, no brushing of teeth—all the things that most of us take for granted with our municipal water supply.

Now, as a Wisconsin Water Resources Science-Policy Fellow, Murray is working to protect the public from the effects that HABs can have. The fellowship springs from a partnership between the University of Wisconsin-Madison’s Aquatic Sciences Center—which houses Wisconsin Sea Grant and the UW Water Resources Institute—and the Wisconsin Department of Health Services (DHS).

“This public health issue is very personal to me,” she said, “so it’s fulfilling to do work around an issue that has so greatly affected my home and community.”

As Murray explained, the blue-green algae (also called cyanobacteria) behind HABs are natural organisms found in all water bodies in Wisconsin. Their presence, in and of itself, is not bad. Trouble arises when they grow to high levels and form blooms that pose health hazards to humans and pets. 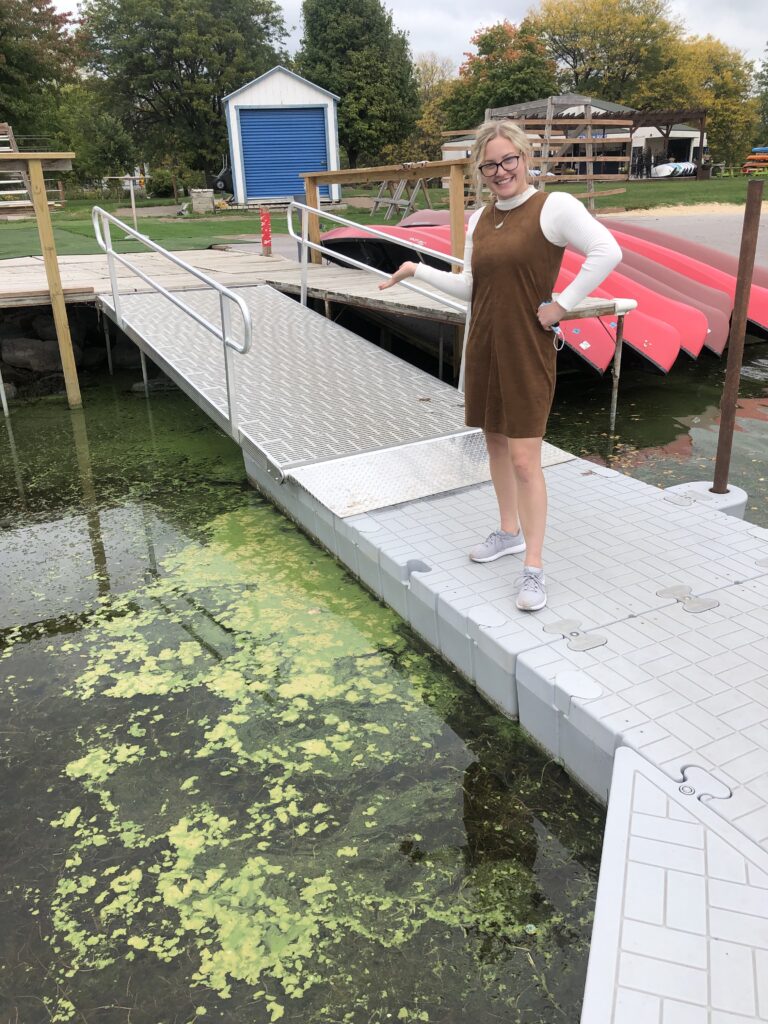 Jordan Murray gestures at some blue-green algae that has accumulated along the shoreline of Lake Monona at Brittingham Park in Madison. (Submitted photo)

What’s more, a changing climate means the issue is growing in importance. “In Wisconsin, we have data to show that two factors that affect bloom intensity, temperature and rainfall events, are increasing. In other words, Wisconsin is getting warmer and wetter,” noted Murray. In turn, this means more chances for people and pets to come into contact with a bloom.

While that’s concerning, the good news is that Murray joins a robust program working to address these challenges. She is stationed at DHS’ Hazard Assessment Section in the Bureau of Environmental and Occupational Health, where DHS health educator Amanda Koch serves as her mentor.

In terms of program management, Murray helps ensure that the HABs program is meeting its goals and Center for Disease Control requirements. To that end, she works with a wide range of partners at the local, state and federal levels, such as local health and parks departments, the Wisconsin Department of Natural Resources, the National Park Service and many more.

The epidemiology side of her role draws on Murray’s graduate training. She holds a master’s degree in public health, with a concentration in epidemiology, from the University of Toledo. After beginning her fellowship in late May, this aspect of her role took center stage over the summer, the most active season for blooms.

She follows up with blue-green algae-related health complaints that are reported to DHS. As a designated state disease investigator, she then gathers and analyzes case data and looks for trends in data. Sometimes that includes working with partners so that water samples are collected and tested at a particular water body; at other times, visual observation is sufficient. While not every human or animal illness suspected to be the result of a bloom actually is, Murray helps make those determinations so that people can take necessary steps to protect their health.

Finally, on the outreach side, she helps health departments around the state with signage, press releases, social media messaging and other tools for communicating vital information to the public. One product in the works is a dog safety sign to be posted at dog swim areas throughout Wisconsin. Once approved, this sign will inform dog owners about what to be on the lookout for and what practices they should adopt to protect their canine friends.

In addition to working with her mentor Koch at DHS, Murray also works with Sea Grant’s Julia Noordyk, who is based in Green Bay as a water quality and coastal communities outreach specialist. One future project they hope to tackle is a blue-green algae workshop in the Green Bay/Fox River area. More details about that will be forthcoming.

While Murray is thriving on the diverse duties and partnerships involved in her fellowship, she’s also finding time to explore the Madison area after moving to the capital city in July. She enjoys being out on the water or trying new activities like rock climbing. A former college volleyball player, she’s interested in both indoor and beach volleyball opportunities. And she’s also a dog owner, with a rottweiler named Leo to accompany her on adventures.

Once her fellowship period concludes, she’d be happy to find a permanent role doing similar work, she says, since she finds it so rewarding. “I wake up every day and I look forward to going to work,” said Murray. “The public health sector is incredible. It’s been a dream working here, so definitely something in this field would be the goal.”