With a master’s degree already under her belt, Sally Mayasich had worked as an environmental consultant for three companies: “One went bankrupt, the other downsized and in another, I was working part time and not making much money, so I decided I had to do something different,” Mayasich said. 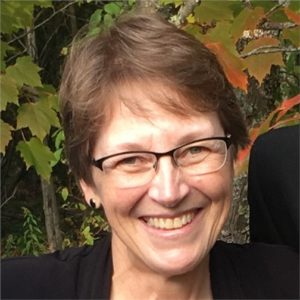 At an age when most people are comfortably ensconced in their careers, Mayasich enrolled in the University of Minnesota Duluth (UMD) to earn her Ph.D. Her work paid off and now she is one of the latest fellows in a partnership between the Environmental Protection Agency’s Great Lakes Toxicology and Ecology Division in Duluth, the University of Wisconsin-Madison and its Aquatic Sciences Center. The goal of the three-year U.S. Environmental Protection Agency Human Health and the Environment Research Fellows program is to train the next generation of scientists in environmental and ecosystem health.

Mayasich’s mentor is Carlie LaLone. They are working with others in the “fathead minnow group” to protect human health and the environment by evaluating the safety of chemicals. They are looking at the effects of chemicals across species, from humans to frogs, to fish, to insects. Using bioinformatics and computer molecular models, they can predict how sensitive a particular species might be to pesticides or other potentially harmful chemicals.

Mayasich explained, “If you have wetlands near a farm field and frogs live in the wetland, and the frogs are more sensitive to a particular pesticide, this knowledge helps regulators consider whether to restrict use of that pesticide in that area. Some people in our group are working on a new group of pesticides called neonicotinoids. They can affect bees. Making sure that we understand how these pesticides affect pollinators is important because pollination by bees is a huge part of our natural ecosystems and also the economics of farming. If you don’t have pollinators, you won’t have crops.”

Mayasich grew up on the Iron Range in Northern Minnesota. She credits time at her family’s cabin on Lake Vermilion for her love of science and nature. “We caught frogs and snakes and did all that kind of stuff when we were kids,” she said. Following in the footsteps of her older sister, Mayasich went to Bemidji State University and earned her bachelor’s degree in environmental studies. She continued her education at the University of Maryland, where she earned her master’s in marine and estuarine environmental science.

After her eventful time in the workforce, Mayasich was accepted into the Integrated Biosciences Program at UMD where she studied sea lamprey hormones, specifically, vasotocin – the lamprey equivalent of the human “love hormone,” oxytocin. She investigated whether the genes in lamprey that control the vasotocin system work in the same way as the oxytocin system in mammals.

“Even the parts that turn the vasotocin gene on and off are similar in lamprey to those in mammals. It’s pretty well-conserved over evolutionary time,” Mayasich said.

Mayasich said she would not change the path she took to obtain her degree. “I’m still very excited about having gone back to school and starting an entire new chapter in my life. Even though I’m not going to have another 30 or 40 years to my career, I’d like to think that what I’m doing in the moment is important. The work I’ve published wouldn’t have been done without me, and it’s being cited by other researchers. That wouldn’t have happened if I hadn’t gone back to school. I’m very happy to be able to contribute to scientific progress.”