Nothing says “Wisconsin” quite like a Friday night fish fry with all the trimmings: rye bread, cole slaw, French fries, and perhaps a cold beer or brandy Old Fashioned. For many people, the star at the center of the plate is crisply battered walleye.

Yet most of the walleye served in restaurants or purchased in grocery stores actually comes from Canada, including a sizable amount from the Canadian waters of Lake Erie, where it is netted by commercial fishermen. 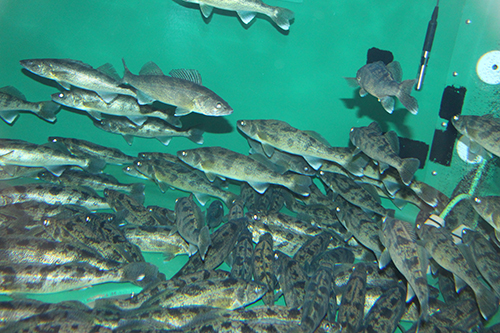 These walleye, raised in a recirculating aquaculture system at the UW-Stevens Point Northern Aquaculture Demonstration Facility, are about a year old. (Photo: UWSP NADF)

One way to increase the availability of this popular fish year-round and have it come from U.S. sources is through aquaculture, or fish farming. Research conducted at the University of Wisconsin-Stevens Point Northern Aquaculture Demonstration Facility (NADF) and funded by Wisconsin Sea Grant is helping fish farmers get closer to being able to raise walleye year-round in indoor recirculating aquaculture systems.

Said Chris Hartleb, NADF Director and Professor of Fisheries Biology at UW-Stevens Point, “For the past eight years, Wisconsin Sea Grant has provided funding to tackle some of the challenges” related to domesticating walleye (Sander vitreus) and making it suitable for farming. Previous research has examined whether walleye can be raised in tanks and, if so, what the optimal density in the tank is for the fish to thrive, as well as starter feeds for walleye and saugeye, a naturally occurring hybrid of walleye and sauger.

Hartleb and Greg Fischer, NADF Assistant Director/Research Program Manager, are the lead investigators on a new project funded by Wisconsin Sea Grant in its 2020-22 project cycle.

The project will focus on making walleye eggs, fry and juveniles available year-round through out-of-season spawning triggered by photothermal manipulation. This means carefully controlling the amount of light and the temperature to which the fish are exposed. That way, multiple crops of fish could be produced throughout the year, as opposed to the single time per year that happens in the wild.

Other key players in conducting the research are NADF Foreman Kendall Holmes, an advanced fish technician, and fellow technician Jared Neibauer. Aquaculture Outreach Specialist Emma Wiermaa will communicate research results to the fish farmers who can use them.

For the study, some fish will be exposed to an early “spring” in early February 2021, through warming water and more light. “And then hopefully those fish will be triggered to spawn, and we’ll get eggs by the end of February. And so, if it works, we’ll get juvenile fish probably around April or early May,” said Hartleb.

While this plan may sound straightforward, it is not guaranteed to work in practice. “It sounds simple enough, since those are the two main triggers for fish to spawn: light and temperature,” said Hartleb. “But some studies have shown”—such as work by Sea Grant’s other aquaculture specialist, Fred Binkowski, involving yellow perch at UW-Milwaukee—“that if you rush them or if you delay them, sometimes the embryos, the offspring, turn out not be viable.”

And not only may embryos die, so may juveniles or early adults, so that’s why it is crucial to grow the fish in the study out to a marketable size of 1 to 1.5 pounds.

Because the NADF team will need to keep producing batches of walleye, they’re working with a range of public and private partners to help them grow the fish out to full size. Those partners include the Max McGraw Wildlife Foundation in northern Illinois and Concordia University Wisconsin in Mequon, which is starting an aquaculture program. Northside Enterprises, a fish farm in Black Creek, Wisconsin, will also participate, and several other farms throughout the state have also expressed interest in raising the young walleye to market size. 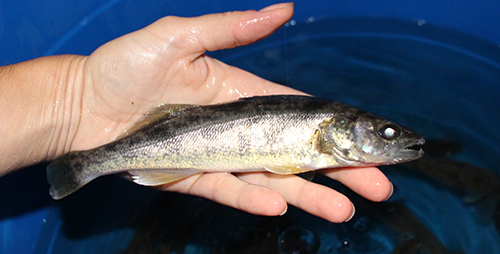 Earlier walleye outreach at NADF has addressed topics like showing farmers how to feed-train walleye to consume a commercial diet from hatch. (Photo: UWSP NADF)

Said Fischer, who has worked with walleye in a variety of systems for about three decades, “The capability to spawn walleye out of season in a controlled aquaculture setting is paramount to bringing commercial walleye production to fruition in the U.S. We have got to have eggs year-round for this to be commercially acceptable. This newest project will allow us to move this species into the commercial aquaculture production sector in the Midwest.”

As with other NADF projects, outreach is a key component, with Wiermaa—whose position is jointly supported by Wisconsin Sea Grant—leading efforts to share NADF research with fish farmers throughout the state.

Said Wiermaa, “Making our projects results accessible and presenting them in ways that are useful to farmers is just as important as the research results themselves.”  This can take a number of forms, including fact sheets, manuals and videos. 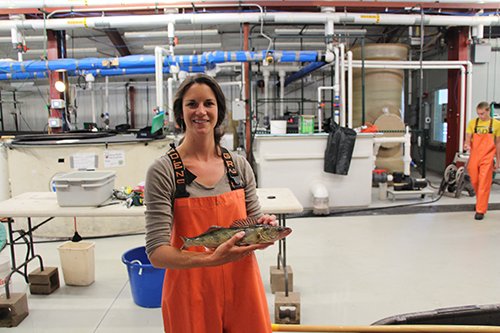 Wiermaa has noted high interest among Midwest fish farmers looking to raise walleye commercially as a food fish. “To respond to these requests for assistance, the Northern Aquaculture Demonstration Facility recently completed a technical video series on raising walleye intensively in water reuse systems. The series compiles nearly a decade of research, and it is accessible online. Results from this newest project will be added to this video series and other outreach tools.”

Ultimately, the NADF team hopes that the research will result in more Wisconsin- and U.S.-raised fish on diners’ plates, and help expand Wisconsin’s aquaculture industry, which is currently a $21 million business that represents about 500 jobs.

“Every time we’ve concluded one of our projects, there’s just tremendous interest [from fish farmers] throughout the Upper Midwest. I think people realize that walleye are a great-tasting fish. And it’s a high-value fish, so it gets a good price on the market,” said Hartleb.