In a concise and informative video released today, Wisconsin Sea Grant presents the science behind the effectiveness of green infrastructure—rain gardens or green roofs, for instance. Green infrastructure can turn down the heat and improve water quality and habitat by absorbing heavy rainfall and diverting it from a sewer system. The question is, what combination of curbside gardens, verdant roofs—or other approaches—packs the most punch.

The video explores the interplay between widespread green infrastructure, urban heat islands and rainfall. “You get this heat bubble around cities and that has some health consequences for people living in the cities,” said Steve Loheide, University of Wisconsin-Madison professor of civil and environmental engineering. “It also affects the weather around the cities.”

In Milwaukee, for example, storms typically come from the west and hit the city where the temperature is warmed by lots of pavement and asphalt roofs. Then, that stormy warm air rises. What rushes into the void left by the warm air is water-laden air from over Lake Michigan, known as an urban sea breeze. This, said Dan Wright, “Turns it (the city) into a hotspot for thunderstorms that tend to cause urban flash flooding.” Wright is also a civil and environmental engineering professor on the Madison campus.

Loheide, Wright and other research team members Wisconsin Department of Natural Resources Water Resources Science Policy Fellow Carolyn Voter and UW-Madison Ph.D. student Aaron Alexander are using models to gauge how a suite of one of the nation’s most ambitious green infrastructure plans, with numerous greening goals, might affect temperature and precipitation. 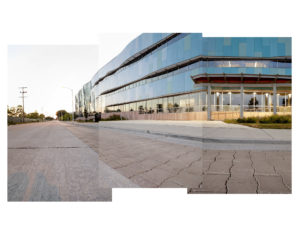 Porous pavement in Milwaukee captures rainwater for infiltration versus running into surface waters or as untreated water into the sewer system. Photo by: Kevin Miyazaki.

Her favorite quote from all the conversations was an uplifting one from Voter, who said, “I really like this project because it feels very hopeful to me. It feels like we’re not just thinking, “Well, what’s going to happen when we have heavy rainfall.’ We’re thinking, ‘Can we change this? Can we take matters into our own hands and reduce our risk.’ ”