As he tells it, there’s a bit of serendipity behind Chris Houghton’s current research on the benthic macroinvertebrate community of lower Green Bay.

While the University of Wisconsin-Green Bay (UW-Green Bay) scientist was doing a literature search related to benthic invertebrates, he found a treasure trove of old records. “I came across a bunch of documents from a former professor’s (Hallett J. “Bud” Harris, who assembled the Harris/Reed collection of documents) library, which are now stored at the UWGB library. These were historical documents from paper companies and other reports that began around 1938, showing a really nice time series of sampling from the same locations.”

The hitch? That historical series, spanning six different time periods, ended in the mid-1990s. “This work hadn’t been done for at least 20 years,” said Houghton.

Now, Houghton and his fellow investigators, with the aid of Wisconsin Sea Grant funding, will be able to redo that survey work and see what has changed. Their results will shed valuable light on the food web in lower Green Bay and carry implications for Area of Concern (AOC) listing in the area. (As noted on the Environmental Protection Agency website, lower Green Bay and the Fox River were designated an Area of Concern in 1987 under the Great Lakes Water Quality Agreement, in part due to degradation of the benthos.) 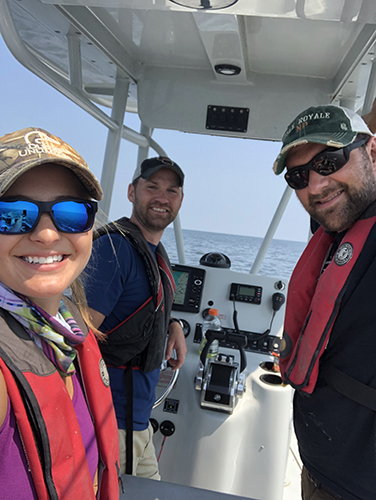 The data-collection phase of this research is now underway. When the project is farther along, said Houghton, he will share findings with the public through an online StoryMap, as well as through the normal scientific channels.

Explained Houghton, “Our aim is to go out, redo this [historical] survey and see what’s changed. Obviously, there’s been a lot of change in the rest of Lake Michigan, both with the invertebrate community, the fish community and everything else, such as the dreissenids and other invasive species.”

It’s important to know what the biomass of available prey is for other trophic levels in the bay, noted Houghton. “It can have an important effect on the number of walleye, yellow perch or whitefish in Green Bay.”

Half of the sample sites studied by the research team are within the Area of Concern, and two of the beneficial use impairments that are part of the AOC relate directly to benthic invertebrates, he said.

“Our sampling will directly inform whether or not these beneficial use impairments can be delisted,” he said. 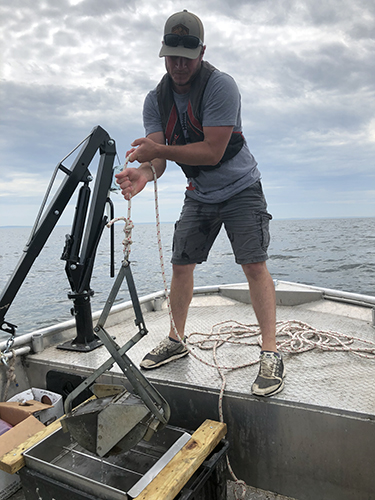 Houghton and his colleagues have been able to leverage Sea Grant funding to attract additional support to broaden the scope of their work. This additional funding comes from the Environmental Protection Agency through the Wisconsin Department of Natural Resources’ AOC program. Now, they’ll also be able to sample within the Fox River to address questions from AOC managers.

The team is also mapping the benthic substrate composition and hypoxia in the region, which impacts both benthic invertebrates and the fish community at large.

When completed, the StoryMap promises to be a rich, visual resource for exploring this data. Houghton has already mapped the historical data. Viewers will be able to explore information over time and by location, up to the present day.

Concluded Houghton, “It’s great to work with a really nice historical dataset and bring it into the present. I’m so appreciative of the people who came before us, did a lot of this work, and made it available for us to work off of.”