You could say that preventing the spread of aquatic invasive species (AIS) is a team sport. While it takes the professional efforts of natural resource managers, AIS specialists and others in the environmental field, it also takes the cooperation of the public.

Professionals encourage and rely on boaters, anglers and other outdoor enthusiasts to take preventative actions such as cleaning, draining and drying their boats and other watercraft and not moving water or live bait from one lake to another. Successful management of AIS and the help of a vigilant public go hand in hand.

Yet for community members to take necessary actions, they must first be aware of the negative impacts AIS can have and how to stop their spread. Communicating with them about AIS in an effective way is vital.

New research from Wisconsin Sea Grant Aquatic Invasive Species Outreach Specialist Tim Campbell, University of Wisconsin-Madison Associate Professor Bret Shaw and consultant Barry T. Radler sheds new light on such communication. The researchers analyzed which communication strategies are most effective and which may pose unintended problems. Shaw is a faculty member in the Department of Life Sciences Communication and is also an environmental communication specialist in the university’s Division of Extension.

The team’s findings were published online Aug. 14 in the journal Environmental Management (“Testing Emphasis Message Frames and Metaphors on Social Media to Engage Boaters to Learn about Preventing the Spread of Zebra Mussels”). 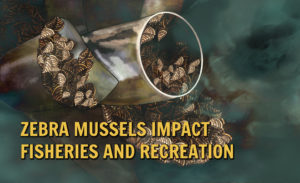 This advertisement is an example of the “science” message framing–a straightforward, factual approach. (Artwork by Brooke Alexander)

The trio used Facebook as a platform to test five types of messages—each invoking a different metaphor or message frame—to educate people about zebra mussels, a significant problem in the Great Lakes and elsewhere. These communication strategies can shape how people understand and form opinions about complex issues.

Paid advertising on Facebook and the social media site’s message-testing feature enabled the researchers to present these different messages to 270,000 people in Wisconsin with an interest in lakes, boating or fishing.

Although the ads presented messages similar to those commonly used in invasive species communication, up until this point little testing had actually been done about their effectiveness. The commonly used message frames were dubbed hitchhiker, militaristic, nativist, science and protective. The messages were paired with artwork by Brooke Alexander.

Many communication goals, the team found, can be achieved by using fact-based or more positive message frames. In general, the science frame—a direct, factual approach—will always perform at least as well as nativist and militaristic frames.

Said Campbell, “This work provides real-world results that can help those working with invasive species achieve their desired communication results, while avoiding possible unintended consequences from their messaging.” For example, nativist message framing (e.g., “alien,” “exotic”) can have unwanted xenophobic connotations while also not performing better than other frames on any tested metric. 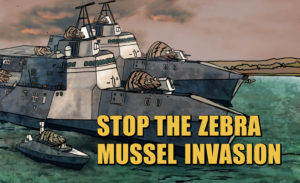 Militaristic message framing can be fraught with unintended connotations. (Artwork by Brooke Alexander)

Similarly, militaristic framing (such as stating we are “at war” with invasive species) can create potentially unhealthy relationships with nature and misguided views on how to manage invasive species.

Shaw noted that the metrics tested for the Facebook ads included cost-per-click, shares and comments. As he explained, “Many scholars and AIS professionals have debated the use of nativist or militaristic language in prevention campaigns, since many of them find that language to be fraught with unwanted implications. Based on our research, we recommend that outreach professionals skip those nativist and militaristic frames and focus instead on clearly communicated science.”

The team’s journal article may be read online. The research was supported by Wisconsin Sea Grant and the University of Wisconsin-Madison Division of Extension.