A passion for mathematics, natural resources and community outreach led Nathan Pollesch to the U.S. Environmental Protection Agency (EPA) in Duluth, Minnesota. That’s where he is working to develop an analytical model that can predict the effects of pesticides on wildlife populations. 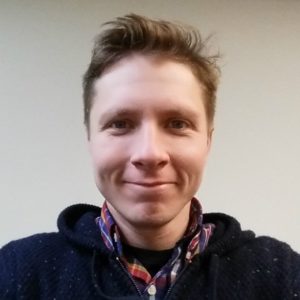 Pollesch is the latest fellow in a partnership project between the EPA’s Great Lakes Toxicology and Ecology Division, the University of Wisconsin-Madison and its Aquatic Sciences Center. The goal of the three-year U.S. Environmental Protection Agency Human Health and the Environment Research Fellows program is to train the next generation of scientists in environmental and ecosystem health.

Pollesch’s EPA mentor is Ecologist Matt Etterson. The duo has been working together already with a group of EPA ecological modelers who are spread across the country. Pollesch said the toxicity translator model he is working on is specific to fish.

“Dr. Etterson got the ball rolling by developing the first model, which is for birds and looks at nesting success related to pesticide exposure,” Pollesch said. “Two others are under development that focus on invertebrates and amphibians.”

These models will be tools that risk assessors at the EPA and elsewhere can use to help inform their assessments of new chemicals and chemicals that are up for reregistration. For instance, for agricultural chemicals, “We can run scenarios. Using some other models developed by the EPA and elsewhere will give us a time series of a concentration of the chemical that we can expect in the environment. We can see how that concentration will fluctuate over the course of a year and then we can pair that with the integral projection model I’m developing. We’ll be able to say, ‘Given this exposure profile, we would expect this potential effect on the populations of whatever species we’re looking at’,” Pollesch said.

Pollesch became interested in mathematics in college, thanks to some excellent professors. “A lot of people see math as this dry, robotic thing. It’s a shame you don’t learn until much later that it’s really not. At a certain point, it’s so far past memorization. That’s when it gets really interesting,” Pollesch said.

He was also interested in natural resource problems and decided to apply his math passion along that pathway. Pollesch earned his bachelor’s degree from the University of Wisconsin-Stevens Point in mathematics. He continued to the University of Minnesota Duluth where he earned his master’s in applied and computational mathematics. For his master’s project, Pollesch developed a model to look at impacts of the Deepwater Horizon oil spill on the Gulf of Mexico. For his Ph.D., Pollesch studied mathematical ecology at the University of Tennessee. Then Etterson had an opening for a postdoc, and Pollesch jumped at the chance to use his mathematical training to help solve environmental problems. His EPA fellowship is offering the chance for him to continue his work with Etterson and other EPA researchers.

Soon after his arrival in 2016 at the EPA, Pollesch started a community outreach program centered on science. He is the lead organizer of a series of monthly science cafes that are ongoing. He said that experience also helped him gain the EPA fellowship.

“Outreach and the application of science had a strong emphasis in the fellowship application. That was especially exciting, given the work I’ve done with Café Scientifique. For those experiences as well as in my own research, I always try to communicate science and what I’m doing at a level that’s appropriate for the people I’m talking to. Also, I have a strong interest in working on applied problems,” Pollesch said.

“I think the reason I do research in the environmental field is because I feel strongly that environmental protection is one of the things that benefits the community the most. Protecting these shared resources is really important for everybody. The community-minded aspect probably influences why I spend time doing community outreach for science. I think there’s a connection,” Pollesch said.

Eventually, more trainees will be placed at the Duluth EPA Laboratory, ranging from undergraduate students, graduate students and postdoctoral fellows such as Pollesch. They will focus on four EPA priorities: systems toxicology, watersheds and water resources, ecosystem services and translational toxicology.