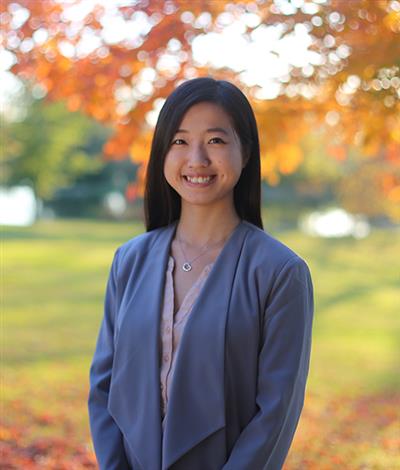 While some find their passion later in life, Yi Liu’s professional trajectory was set in motion at an early age.  At 7, she first saw the Pacific Ocean while visiting Shandong province in eastern China.  Until then, she had lived in a small, mountainous town in the southwest.  Her first ocean glimpse made a lasting impression.  “I was amazed at how beautiful the coastline is, and my interest developed from there,” Liu recalled.

Now, Liu’s path has brought her to Wisconsin, where she is the new J. Philip Keillor Coastal Management-Sea Grant Fellow, where she’ll work on updates to the Coastal Processes Manual and tackle other duties.

The one-year fellowship is sponsored jointly by Wisconsin Sea Grant and the Wisconsin Coastal Management Program.

Liu arrived in the Dairy State after five years in Virginia, where she earned a Ph.D. in civil engineering at Virginia Tech.  She also completed a two-year NOAA/Virginia Sea Grant Coastal Storms Fellowship.  Prior to her time in the United States, Liu earned a bachelor’s degree in naval architecture and ocean engineering at Shanghai Jiao Tong University.

At Virginia Tech, she worked with her advisor, Dr. Jennifer Irish, on coastal flood risk analysis.  Her interest was sparked by events during Hurricane Ike, which made landfall at Galveston, Texas, on Sept. 13, 2008.

While Ike’s landfall was devastating, part of what made the storm so destructive actually occurred before landfall:  a forerunner surge.

“People worry about peak storm surge, which usually corresponds with landfall of a hurricane,” said Liu. “But during Hurricane Ike, a forerunner surge happened about half to one day before landfall at Galveston,” an island city on Texas’ Gulf Coast.

The forerunner surge reached as high as two meters in parts of Galveston. “It stranded many people on the island and the peninsula.  Many people didn’t evacuate before roads were blocked by water.”

To do this, she simulated storms and then analyzed the data for her doctoral research.  The model was validated against observational data, and storm simulations were based on actual meteorological facts for an area.  Liu then extracted mathematical equations or physical laws from the results.  Said Liu, “Dr. Irish and I developed a set of equations to forecast forerunner surge magnitude and time based on storm characteristics and pre-run reliable model results.”

Her Virginia Sea Grant Fellowship also dealt with forerunner surges and flooding, focusing on the mid-Atlantic coastline.  She gained valuable experience working with stakeholders.  “It really showed me how the real world can shape my research goals and objectives.  Two-way communication between scientists and stakeholders is so important,” said Liu.

The previous Keillor Coastal Management Fellow, Adam Bechle, remains on staff in a new capacity, and Liu looks forward to working with him as well.  Bechle is an outreach specialist with Wisconsin Sea Grant and the Wisconsin Coastal Management Program, coordinating Wisconsin’s NOAA Coastal Resilience Project.

When not updating the Coastal Processes Manual, Liu will have the opportunity to work on other projects as they arise.  “I hope to get the bigger picture of problems here in Wisconsin and the Great Lakes, and see how I can help using my skills,” said Liu.

One area of interest is probabilistic surge hazard maps, another topic she worked on in graduate school—in that instance, connected to national flood insurance maps for Tampa, and how those maps will be influenced by sea level rise.

While professional pursuits keep her busy, Liu makes time for fun as well.  Hip-hop dancing is a favorite way to express herself and blow off steam.  She also enjoys traveling and reading.  And once the snow flies, Liu also plans to continue learning how to ski.

Given where Liu’s childhood curiosity has already taken her, there’s little doubt she will conquer whatever she sets her mind to.