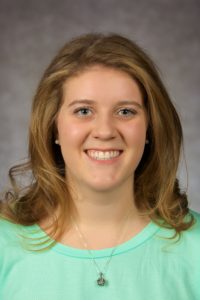 In her studies, master’s degree student Megan Hoff pursues a balance between people, the planet and prosperity. She foresees her career ultimately following that same philosophy and is working with Wisconsin Sea Grant’s Julia Noordyk in Green Bay to make that possible.

Noordyk, water quality and coastal communities outreach specialist, hired Hoff last fall as the first-ever graduate assistant in one of Sea Grant’s field offices. In this role, Hoff receives full tuition, benefits and a stipend for two years at the University of Wisconsin-Green Bay.

“At Sea Grant, we’re trying to integrate more of the social sciences into our program,” Noordyk said. “Hoff had a social science policy background, and that’s what made her application stand out. She has a high interest in being interdisciplinary.”

Hoff earned her bachelor’s degree from DePaul University in Chicago in environmental studies with an economics minor. In addition to attending graduate classes for her environmental science and policy degree Hoff is working 20 hours per week on Sea Grant projects. The first is a community-based watershed plan for Mahon Creek and Wequiock Creek, which flow along and through the university campus into coastal wetlands along Green Bay. Both creek watersheds are part of the Lower Green Bay and Fox River, one of the most degraded aquatic ecosystems along the Great Lakes and designated as an Area of Concern by the U.S. Environmental Protection Agency.

In an approach that Noordyk characterizes as unique, Hoff is working in concert with the Cofrin Center for Biodiversity at UW-Green Bay to involve university students and staff, state and federal agencies, citizen scientists, foundations, land trusts, several local governments and private landowners in creation of the watershed plan with hopes to improve habitat and water quality.

“I think it’s very important to integrate the community’s voice into conservation projects and planning,” Hoff said. “This watershed plan is very much a public policy document in that it addresses policies that are related to everyday actions within the community. We hope to work with the various stakeholders to encourage practices within the watershed that are better suited for the environment and subsequently, human health.”

The other project receiving Hoff’s attention is the Green Infrastructure Code Audit. This is a workbook created by Noordyk and partners, which shows communities how to review and update their city codes and ordinances to encourage practices that reduce stormwater pollution. Hoff will be helping Noordyk develop a companion resource to the workbook that features examples of code amendments.

Hoff is excited to work for Sea Grant. “Throughout my undergraduate program and the years leading up to my master’s degree, I’ve looked up to the Sea Grant organization. I’ve aspired to work for it and I am thankful to now be part of it,” Hoff said.