Milwaukee is known for its busy urban beaches along Lake Michigan. As in communities elsewhere, beach managers use E. coli as an indicator of the presence of pathogens, and elevated E. coli levels can result in beach closures during prime swimming season.

E. coli, which can come from either human or animal fecal matter, can, at certain levels, cause human health problems. As the Milwaukee Health Department notes on its website, “Symptoms such as upset stomach, nausea, vomiting, headache and fever can result from exposure to disease-causing organisms in lake water.”

Wisconsin Sea Grant-funded researchers are finding, though, not all E. coli at the beach is the same, making it more complex than previously thought to determine if a beach is truly unsafe for humans.

Sandra McLellan, a professor at the UW-Milwaukee School of Freshwater Sciences, and Natalie A. Rumball, a Ph.D. candidate working with McLellan, are investigating this issue.

Said Rumball, “I study the survival of E. coli in beach sand. This is really significant because, all around the Great Lakes and on the ocean coasts, we use E. coli as an indicator of fecal pollution… and to determine if water is safe to swim in.”

Yet, she said, E. coli can sometimes survive for a long time in beach sand. Because of that, the presence of E. coli is not necessarily an indicator of recent fecal pollution and contaminated water. As Rumball explained, “Not all E. coli are created equal. Certain strains are highly pathogenic, while others are a normal part of the gut microbiome. Generally, the E. coli that I have found in beach sand have been non-pathogenic.”

Rumball and McLellan have been focusing on the genetics underlying why some strains are able to survive versus others.

While the current pandemic has made work more complicated for many scientific researchers, Rumball says she is fortunate to be in the data analysis stage of the project at present, having already conducted experiments in the field. 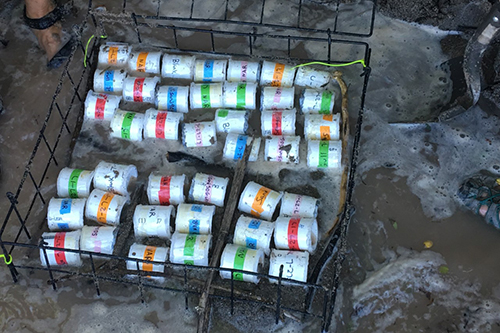 Her process entailed collecting E. coli samples from Milwaukee beach sand, sewage and seagull waste and putting them in growth chambers (also called microcosms). She then buried the microcosms for six weeks at several beach locations. After digging up the microcosms, she then determined which strains were able to survive and which were not, and compared the genomes of those two groups.

Based on DNA sequencing, she found that the hardy survivors “tend to have more metabolic capabilities, so they’re able to break down more substrates for nutrients.” 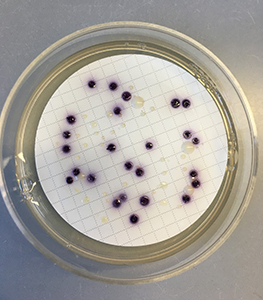 One discovery Rumball made is that E. coli from different sources were able to survive long-term. “Originally, I had thought that maybe E. coli from a certain animal, or from a certain source of waste pollution, would survive better than the others,” she said. But she found E. coli from the human gut and from seagull droppings survived at about the same rate in beach sand.

The project has also provided opportunities for science mentoring. Rumball has worked with both UW-Milwaukee undergraduates and a high school student, HannahRose Mayer, from nearby Whitefish Bay High School.

Eventually, beach managers will be able to apply the knowledge gained from Rumball and McLellan’s work.

Said Rumball, “The methods developed in this work could be used to assess those beaches that appear to be chronically contaminated with E. coli.”

Based on the team’s genomics work, molecular markers could be designed that would indicate if a beach has long-term E. coli survivors in the sand — that then disperse via the wind — or if that beach truly suffers from consistent fecal input that poses a health risk to beachgoers.