Making tracks is nothing new for Jackson Parr, the J. Philip Keillor Flood Resilience-Wisconsin Sea Grant Fellow. A serious athlete who once committed to walking across the entire United States (his plan has morphed to running it in segments), he has also traversed the scenic towns of Wisconsin’s Door Peninsula as a newspaper reporter and editor. 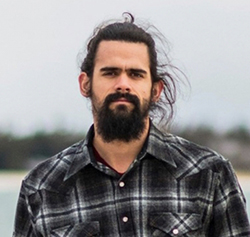 Now, he’s getting acquainted with dozens of small communities statewide to help them build resilience to flooding hazards.

Parr began his one-year Keillor Fellowship in April. The position stems from a partnership between Wisconsin Sea Grant and the Climate and Health Program at the Wisconsin Department of Health Services (DHS).

He’ll work extensively with the Flood Resilience Scorecard, a toolkit that measures how well prepared a community is to cope with the effects of flooding—and identifies steps they can take to boost that preparedness.

The Illinois native brings a varied set of skills to this work. Parr holds two master’s degrees from the University of Wisconsin-Madison: one in public affairs and one in water resources management. His capstone project for the water resources degree involved analyzing the severe flooding of Coon Creek in Vernon County in August 2018. The project was suggested and advised by UW research scientist Eric Booth. 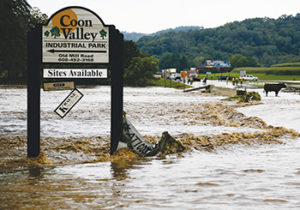 The village of Coon Valley was downstream from the breached dams during the August 2018 flood event. (Photo: John Lee)

“There were a few dam breaches in that region during that flooding event, and it devastated the area,” said Parr. Flash flooding brought on by torrential rains displaced residents and caused major damage to homes, businesses and public infrastructure. “While I didn’t have an academic interest in flooding before working on that capstone project,” said Parr, “I found myself fascinated with the ways that rural communities navigate these issues.”

As he noted, sometimes smaller communities lack the administrative capacity or technical expertise required to fully address issues or tap into available funding sources that might help them. As a Keillor Fellow, Parr will be in a position to link communities with needed resources.

By March 2022, when his fellowship concludes, Parr hopes to have worked through the Flood Resilience Scorecard with 30 communities. Those locations will be chosen through collaboration with Wisconsin’s nine regional planning commissions.

First rolled out in 2019, the scorecard focuses on three key areas that affect a community’s resilience to flooding: environmental factors (such as precipitation patterns and soil composition), institutional factors (such as city planning documents) and social factors. Social factors include the socioeconomic makeup of the community, which may affect what happens after flooding.

“Since this effort is a partnership with the Department of Health Services, they’re definitely interested in the public health aspect of flooding. Demographic data is important in considering populations that might have socioeconomic vulnerabilities that would exacerbate their health outcomes related to flooding,” said Parr.

As an example, he noted that residents in low-income communities often lack the resources to find other housing when displaced. As a result, those populations face not only physical injuries related to flooding, like blunt-force trauma and hypothermia, but extreme stress and other mental health impacts.

“The goal is to identify communities that face these vulnerabilities and hopefully target more resources toward those communities to achieve health equity,” he said.

As Parr conducts this work, he has a trio of mentors. At DHS, he reports to Climate and Health Program Coordinator Margaret Thelen. On the Sea Grant side, he’s working with Climate and Tourism Outreach Specialist Natalie Chin and Coastal Engineering Specialist Adam Bechle.

Said Thelen, “The partnership between the Department of Health Services and Sea Grant has allowed us to work together to integrate our flood resiliency tools for local decision makers. These resources allow Wisconsin to better prepare for and respond to increased extreme precipitation events due to climate change. We are fortunate to have Jackson Parr, through the Keillor Fellowship, working to improve these tools and make them more accessible to municipalities across the state.” 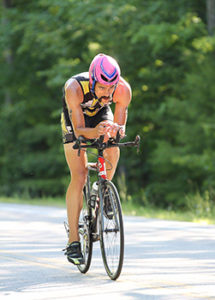 Parr in his triathlon days. Though he no longer competes, he’s running across the United States in segments. (Submitted photo)

As university travel restrictions related to the pandemic ease, Parr hopes to complete in-person assessments, arranging visits to work through the scorecard with elected officials, administrators and planning staff in the selected communities.

“There’s a huge value in having these conversations face to face; it takes collaboration from people of different backgrounds” who actually live in those communities, said Parr.

But completing the scorecard with a community is not an end point, Parr stressed. Rather, he hopes it is a springboard for taking action.

“While community leaders would immediately get some high-level recommendations on ways to improve resilience, I’d go back and look through our conversations and come back to the municipality and work with them on implementing recommendations. It’s a whole other ballgame to actually pass an ordinance or apply for a grant or participate in a buyout program. The goal is for communities to act on the recommendations they receive,” said Parr.

Parr can be reached at jackson.parr@dhs.wisconsin.gov.