When John Berges and Erica Young arrived to work at the University of Wisconsin-Milwaukee in 2002, the nuisance algae Cladophora was the big issue. They began collaborating with other researchers to investigate causes of the massive algal bloom in Lake Michigan. If they knew what was causing it, they might have the keys to reverse it. 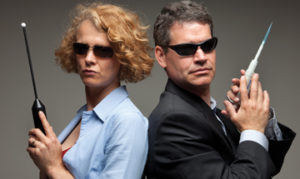 While they didn’t immediately unlock the secrets of Cladophora blooms, they came upon another compelling finding that may play a role.

“We put some Cladophora under the microscope and what immediately impressed both of us was it was absolutely covered with diatoms – phytoplankton that use silica in their cell wall. They were living all over it!” said Berges, professor of biological sciences, and an affiliate of UW-Milwaukee’s School of Freshwater Science.

After discovering that about 2% of the weight of Cladophora comes from silica, which Berges said is an “enormous amount,” and that no one knew this before, they quickly focused on silica.

Silica is a compound of silicon and oxygen. It has mineral forms like quartz and is the main component of sandstone and other rocks. It also has a biological form (biogenic silica, which is contained in living things like diatoms) and it plays an important role in the food web – limiting the growth of diatoms (single-celled algae) that fish depend upon for food. It also plays a critical role in carbon cycling, wetlands function and freshwater ecosystems. In humans, our bones, teeth and tendons need silica to remain strong and healthy.

Berges and Young discovered that throughout the summer, silica levels yo-yo in the lake. 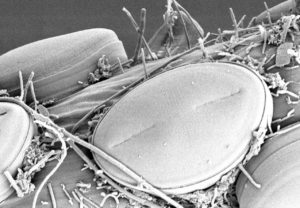 “As the deep water from the lake upwells and comes into shore, the silica goes up because there’s a deep reservoir of silica. But then, something in the nearshore sucks all that silica out and it goes way down again,” Berges said.

The other thing they discovered is that silica levels in lakes Michigan, Huron and Superior have been rising consistently and drastically over the past 30-35 years. Before that, silica levels were sinking.

“There’s no clear answer as to why,” Berges said. “So, we’ve got ourselves a real mystery.”

Along with Hunter Carrick, a biology professor at Central Michigan University, the duo successfully proposed a project to Wisconsin Sea Grant in 2018 for funding to study the changing silica dynamics in Lake Michigan for two years.

They are measuring dissolved and biogenic silica in three nearshore regions of Lake Michigan to characterize variations in response to rainfall and upwellings, assess its use by Cladophora, and develop a picture of how it’s used in the nearshore region.

“It’s a fairly comprehensive look at the sources of silica in Lake Michigan,” Berges said. “We’ll measure it in rivers, we’ll get a handle on it on both sides of the lake, but also in organisms that might be using silicate and how much they contain.”

Because so many organisms use silica, the researchers can think of many reasons why silica levels should be dropping. They aren’t sure why the levels are rising. Berges said it’s a “real head-scratcher.” 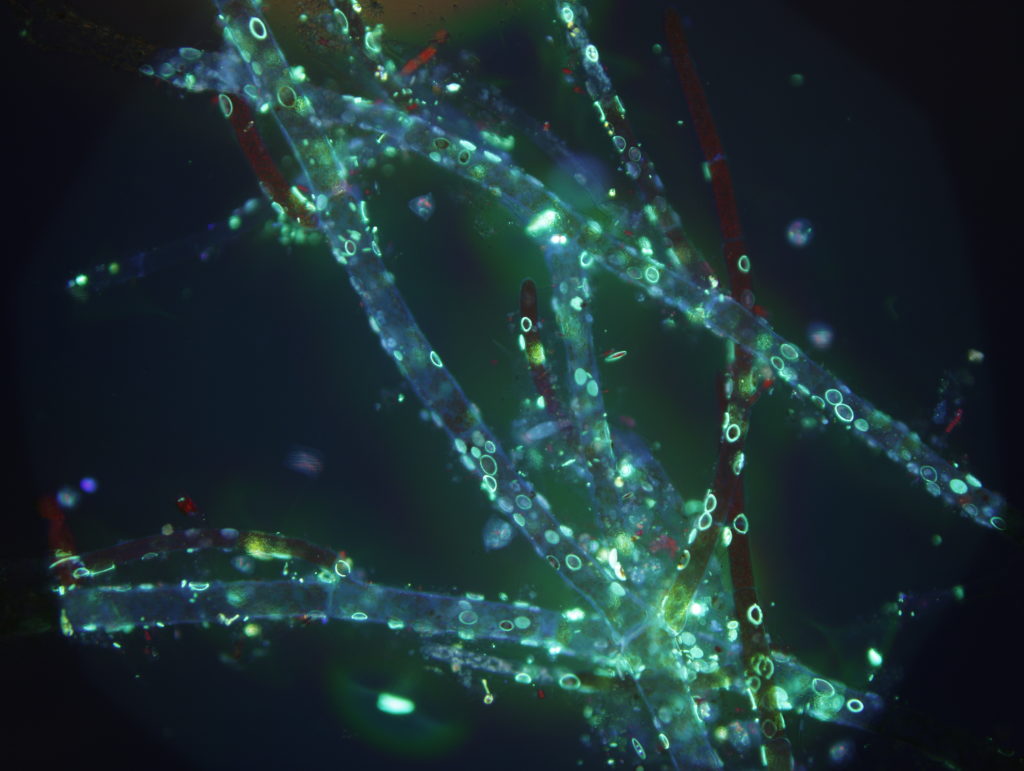 A microscope image of Cladophora filaments stained with a green dye. The dye indicates biological silica in cells, and shows up in the diatoms growing on the Cladophora. Image by Erica Young.

Young, an associate professor of biological sciences and also an affiliate in freshwater sciences at UW-Milwaukee, is conducting parallel laboratory studies to determine how algae grow with and without silica. “If you’ve got these different types of algae in your system, where do you find the silica – where are the pools of silica?” Young said. “We know about this for diatoms, but for other algae, we are not as sure. This lab work will hopefully give us that kind of information.”

Young and Berges spent part of last year at the University of Tasmania’s Institute for Marine and Antarctic Studies and Australia’s Commonwealth Scientific and Industrial Research Organisation growing marine phytoplankton and measuring the amounts of silica they contain.

“This helped us understand which species, both in marine and fresh water, that we might have neglected, could contain silica in addition to the diatoms. We found a number of cyanobacteria and some green algae, which are also found in fresh water, that seem to have very high silica. That was a surprise and will be really useful information,” Berges said.

They also looked at silica levels in marine seaweeds surrounding the island of Tasmania.

Citizen science is yet another part of this project that’s in the works. The researchers plan to host several workshops at ecology centers to train people to use their cell phones as microscopes so they can take images of Cladophora.

“We want people to go down to the shore, pick up the Cladophora, put it under their cell phone microscopes, and ultimately, snap pictures for us,” Berges said. “Most cell phones have a GPS in them so they are geo-referenced, which will tell us where the Cladophora came from. If we realize this idea, we’ll be able to collect data on where Cladophora is around Lake Michigan and what sort of ‘load’ of diatoms it has on it.”