Once niche, podcasts have gone mainstream. According to figures cited in Forbes, 62 million Americans now listen to podcasts each week.

While Wisconsin Sea Grant and the University of Wisconsin Water Resources Institute have been involved in podcasting for years—from the current series Wisconsin Water News to older programs like Earthwatch Radio—there’s a new kid on the block: a podcast called “Introduced” that will be devoted to aquatic invasive species (AIS). Its tagline is “aquatic invaders and stories from our changing waters.”

The series will span seven episodes, with one per week released beginning May 27. Listeners can find it on Apple Podcasts, Google Play, Spotify and on Sea Grant’s website.

While the simple name for the series conveys a bit of mystery, it also makes perfect sense. Said Willison, “As Sydney and I started learning more about invasive species, we noticed that there is a tendency for people to villainize these species. But we also noticed that humans are the ones introducing all these species to new environments. The title for our series puts the agency on people, which is something that we focus on in the podcast.” 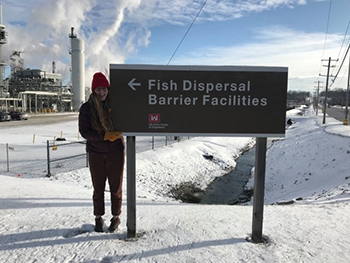 Sydney Widell, one of the creators of the new podcast, on a visit to an electric fish barrier in Illinois in February. The barrier helps keep Asian carp out of the Great Lakes. (Photo: Bonnie Willison)

Topics are wide-ranging, from Asian carp to the trade in invasive species on the Internet. Because the AIS field is so rich, Willison anticipates doing a second season of the “Introduced” podcast. Stay tuned!