Owners of steel structures on inland lakes and a river in northern Minnesota are reporting the same kind of corrosion as seen in the Duluth-Superior Harbor and other harbors along Lake Superior. A structural engineering firm reported it has designed and overseen replacement of gates on dams along the St. Louis River, far removed from Lake Superior water, because of the corrosion.

Along with partners, Gene Clark, retired Wisconsin Sea Grant coastal engineer, devoted considerable energy into ferreting out the causes of and ways to mitigate this corrosion, which can lead to costly harbor infrastructure replacement.

The accelerated corrosion of steel pilings in the Duluth-Superior Harbor was first noticed in 1998. Researchers funded in part by the Wisconsin and Minnesota Sea Grant programs eventually identified microbes as the culprit combined with a complicated interaction between water and the steel. Bacteria form small lumps, or tubercles, on the steel. The lumps limit oxygen and allow small amounts of copper in the water to interact with and dissolve the steel, which results in pockmarks and holes that compromise steel structures. 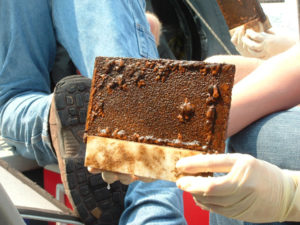 Experts brought together to investigate the issue blamed water chemistry specific to Lake Superior. However, those still tracking the issue have discovered this microbially influenced corrosion problem is more widespread.

Chad Scott, principal at AMI Consulting Engineers, initially alerted harbor industries about the corrosion issue in 1998 when he was a diver inspecting structures in the Duluth-Superior Harbor. Scott said during the past few years his company has worked with the U.S. Army Corps of Engineers to place steel samples (or coupons) in the St. Louis River at the Thomson Dam, Scanlon, Cloquet and near Cotton.

“At every single location along the river, the steel had the same tubercles on them,” Scott said. “So, what that tells me is, what’s coming to the harbor is coming down naturally from inland in Minnesota.”

Scott said his firm designed and oversaw replacement of gates on the Fond du Lac Dam and the Sappi Dam in Cloquet.

“They were all heavily pitted. It looked just like harbor corrosion,” Scott said. He’s also had friends report biocorrosion on their docks on Fish Lake, Island Lake and Grand Lake. He’s seen firsthand the dock posts covered by corrosive tubercles on those lakes. 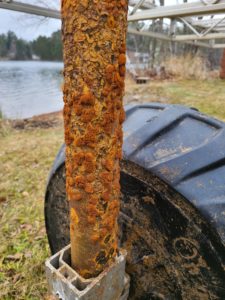 Randall Hicks, professor emeritus at the University of Minnesota Duluth, has worked for years to understand the microbiology behind the corrosion. He said he has seen the tubercles on his own dock on Barrs Lake near Two Harbors. He has also identified them in photos from a dock on Wilson Lake near Cotton.

“I don’t think it’s just a regional problem,” Hicks said. “I think it’s been happening all along for a long time in places where conditions are right.” Those conditions include the presence of sulfate-reducing bacteria and iron-oxidizing bacteria, a source of dissolved sulfate and iron, and low-oxygen conditions such as those sometimes found in spring water.

Hicks described how the process begins when a clean sheet of steel is placed in water. “Different bacteria will attach to the surface and form a biofilm first.” Dental plaque is a common example of a biofilm. Microorganisms multiply and create a thin but tight layer on teeth. In this case, the biofilm layer is on steel.

Jim Sharrow, retired director of planning and resiliency with the Duluth Seaway Port Authority, said the corrosion bacteria are not an invasive species. “They’re indigenous to this area. They’re all over.” 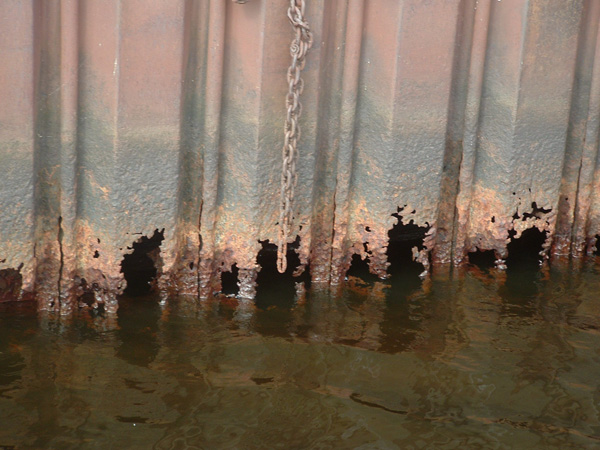 Previous research identified coatings that can be used to protect steel. Hicks is now working on ways to fool the bacteria in the first place. Hicks and Mikael Elias, associate professor from the University of Minnesota Twin Cities, have found that adding a lactonase enzyme into a steel coating can reduce the biofilm produced, change the biofilm community and reduce the amount of corrosion. The lactonase enzyme works by destroying signaling molecules that the bacteria on steel produce to sense each other – in essence, fooling the bacteria into thinking they are alone, so “they don’t turn on genes to produce a biofilm,” Hicks said.

The nontoxic coating enzymes only last a month or two before degrading or diffusing out of the coating but Hicks said that, compared to untreated steel, the enzymes have reduced corrosion by 50% for at least two years, which was the length of their study.

“Hopefully, these enzymes can have an impact even farther out. If you’re in the shipping business and you expect a steel structure to last 100 years, then all of a sudden you have to replace it every 50 years because of the corrosion, that’s a big economic impact – and that’s just with doubling the corrosion rate. If we can reduce the rate, we don’t need to have a big impact to really extend the lifetime of structures quite a ways down the road,” Hicks said.

The University of Minnesota has applied for a patent for the lactonase enzyme coating. Hicks and Elias have also conducted tests in Lake Minnetonka and the Mississippi River to see if the same mechanism in the enzymes that inhibits biofilms from forming on steel inhibits larger invasive and nuisance organisms like zebra mussels and barnacles from attaching to underwater structures.

Until the lactonase enzyme coating becomes commercially available, what should cabin dock owners do to protect their steel from biocorrosion? Sharrow said, “Basically, what we found is, all you need to do is keep paint on your dock. You need to keep the water from touching the steel. You can use epoxy, but if you take your dock out every fall, you could probably use Rustoleum or something like that.”

Beyond docks, enzyme technology might also work on farm crops and in people. Elias said he is testing whether a lactonase enzyme spray can protect corn from a common bacterial infection (Gross’s wilt). Cystic fibrosis patients are prone to bacterial pneumonia, which forms in a biofilm.

Elias said, “One of our goals is to potentially use this enzyme as an aerosol to prevent biofilms in the lungs. . . It appears from our experiments that everywhere microbes are creating some sort of nuisance, this enzyme, because it changes the behavior of bacteria, can be helpful. We have a lot of different investigations to do and we are trying our best to pursue some of them as hard as we can.”

“This all grew out of those initial corrosion studies funded by Sea Grant and the work we did with Gene Clark and the other people in the corrosion study group,” Hicks said. Other organizations involved include the U.S. Army Corps of Engineers and the Great Lakes Maritime Research Institute.