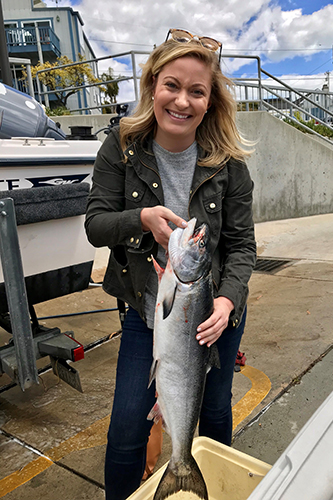 For Danielle Cloutier, who grew up in Racine, Wis., near the Lake Michigan shoreline, water and fishing have always been part of her life.

Now, she’s bringing the education she received in her home state—plus experience gained as Wisconsin Sea Grant’s 2017 John A. Knauss Marine Policy Fellow—to the newest stage of her career. In February, the American Sportfishing Association named Cloutier its Pacific Fisheries Policy Director. She is based near Capitol Hill at the association’s office in Alexandria, Virginia.

The American Sportfishing Association (ASA) is the country’s largest trade association for the sportfishing industry. It represents a broad range of interests, from makers of fishing equipment to outdoor retailers, fishing guides and more. It also has a team that works on legislation with a conservation focus.

“ASA is a mix of professional representation and science-based conservation that is pretty unique, and that’s what attracted me to it,” said Cloutier, who also noted, “Sound conservation policies also benefit the fishing industry.”

Before joining ASA, Cloutier worked at the nonprofit Oceana, where she handled government relations for the organization’s fisheries and ocean conservation campaigns. While there, she interacted frequently with ASA, including on proposed legislation that is currently one of her main projects at ASA, the Driftnet Modernization and Bycatch Reduction Act.

The proposed legislation would phase out the use of drift gillnets in federal waters. Such nets entangle species they are not meant to catch—whales, dolphins, sea turtles and fish of interest to the sportfishing community—and more than 60% of what the nets catch is discarded and often dead, said Cloutier. She hopes to see Congress pass this legislation in its current session.

Her year as a Knauss Fellow played a critical role in integrating her interests in policy and aquatic science, said Cloutier.

“When I was working on my Ph.D., I knew early on that I didn’t want to go into academia. And that can be a little intimidating when you’re in a Ph.D. program, because you don’t know where to turn,” to explore other career options, she said.

“The Knauss Fellowship became my graduation goal” upon completing her doctorate at the University of Wisconsin-Milwaukee School of Freshwater Sciences. There, she studied aquatic microbial ecology under the direction of Professor Sandra McLellan.

The Knauss program is currently celebrating its fortieth anniversary, and Sea Grant programs nationwide have supported over 1,000 fellows since 1979.

For her fellowship, Cloutier worked with Sen. Brian Schatz of Hawaii in his Washington, D.C., office, advising him on environmental and energy policy. The fellowship added formidable policy chops to her resume, and she learned firsthand about the importance of building bipartisan support in order to pass legislation.

The Knauss experience also helped her break into the policy field, which can be difficult. “It really gave me a leg up in terms of making connections, and I know that without this fellowship, I wouldn’t have the position that I do now. I was so fortunate to be one of the selected few to receive this fellowship,” said Cloutier.

As you might expect for an ASA staff member, when she’s not in the office, Cloutier is a lifelong angler who enjoys both freshwater and saltwater fly-fishing. “Fishing is suited for people of all ages, and women and men alike,” she said.

Though she may no longer reside in the Badger State, a love a water, fishing and the outdoors that was born in Wisconsin has taken her far.