Prarthana Shankar gets around, and it’s all in the name of science. She has moved from tropical southern India, to California, to Oregon. Her next stop? The Environmental Protection Agency’s (EPA) Great Lakes Toxicology and Ecology Division in Duluth, Minnesota.

Shankar is one of the latest fellows in a partnership with the EPA, the University of Wisconsin-Madison and its Aquatic Sciences Center. The goal of the three-year U.S. Environmental Protection Agency Human Health and the Environment Research Fellows program is to train the next generation of scientists in environmental and ecosystem health. Shankar’s position will last two years.

Along with her EPA mentors Gary Ankley and Dan Villeneuve, Shankar has been working from her home in Oregon since May to understand the risks that per- and polyfluorinated alkyl substances (PFAS) pose to freshwater fish and ecosystems. She plans to use fathead minnows and zebrafish in her studies. 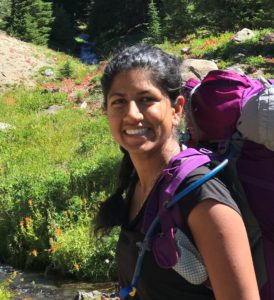 “In the past few weeks, I’ve developed an interest in understanding the thyroid system,” Shankar said. “PFAS have been shown to have negative effects on the thyroid system, so I’ll be testing that and also seeing if they have higher-level impacts such as on the growth of the fishes.”

PFAS are a class of chemicals of emerging concern. PFAS exposure is linked to human health concerns, including compromised immunity, low birth weight, endocrine disruption and cancer. These chemicals get into the environment from sources like firefighting foam and industrial processes.

Shankar credits her dentist father for her love of science. “He was the kind of person who would look through my school biology books and talk to me about the concepts,” she said.

After growing up in India, Shankar had an opportunity to come to the U.S. to study, which she did. It was then she realized she loved the environment and wanted to be involved in ecological research. She eventually enrolled in California State University-Fullerton, where she majored in biology with a minor in chemistry.

While there, she was chosen for the Southern California Ecosystems Research Program (SCERP), which allows scholars to work on independent projects and present their work at conferences, concluding with a thesis.

“The SCERP program is what really got me into doing research and gave me my first experience in a lab setting,” Shankar said.

Shankar then moved onto Oregon State University in Corvallis, where she completed her Ph.D. program earlier this year. She studied the effects of polycyclic aromatic hydrocarbons (PAHs) (a class of chemicals that occur naturally in substances such as coal, oil and gas) on zebrafish.

Due to the pandemic, she has not moved to the EPA office in Duluth yet, but looks forward to it in a few months. She has even learned how to cross-county ski in preparation. “This postdoc position is the perfect opportunity to combine my work with my passion for the environment. Corvallis is the coldest place I’ve lived up until now. Moving to Duluth is going to be an adventure!”