Sea Grant Fisheries Specialist Titus Seilheimer promised a “great adventure” during the premiere of a  new episode of “Feral,” 8 p.m. Monday, Jan. 9, on the Outdoor Channel.

“In the summer of 2022, I joined Twin Cities chef Yia Vang and 2022 James Beard Award Finalist for ‘Best Chef Midwest’ on the waters of my home lake in northwestern Wisconsin,” Seilheimer said. “We were on a dangerous hunt for an invasive species lurking in the depths of Rusk County’s Clear Lake, the Chinese mysterysnail! Okay, so not a dangerous hunt, but a great adventure.” 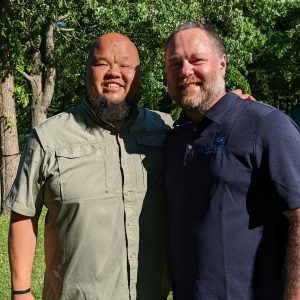 Chinese mysterysnails were first reported in the U.S. more than 100 years ago when they showed up in the San Francisco area. They were likely brought to North America for sale in  live markets because they are a popular food in Asia.

They expanded their range over time and were first reported in Wisconsin’s Clear Lake in 2011. Seilheimer said, “I first spotted them shortly after and thought that big snails were a sign of good water quality. Soon after, at an invasive species conference, I was hit with the realization that those big snails in my lake were invasive mysterysnails.”

The snails are larger than the native species in Wisconsin lakes, so they can potentially outcompete the local snails. They also are more protected by their operculum (like a trap door), so they can avoid predation better than native species.

In addition to his culinary skills and ownership of Minneapolis’s Union Hmong Kitchen, Vang is the host of the nationally broadcast program “Feral.” A teaser for the Jan. 9 show recently dropped.  In it, we see Seilheimer in the background, encouraging Vang’s preparation of Chinese mysterysnails in a steaming saute pan. Vang refers to the nonnative snails as the Wagyu of the lake. 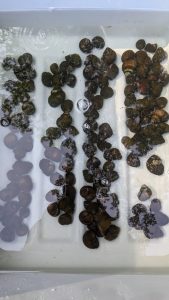 Nonnative Chinese mysterysnails collected from a Wisconsin lake just before Chef Vang prepared a tasty meal out of them.