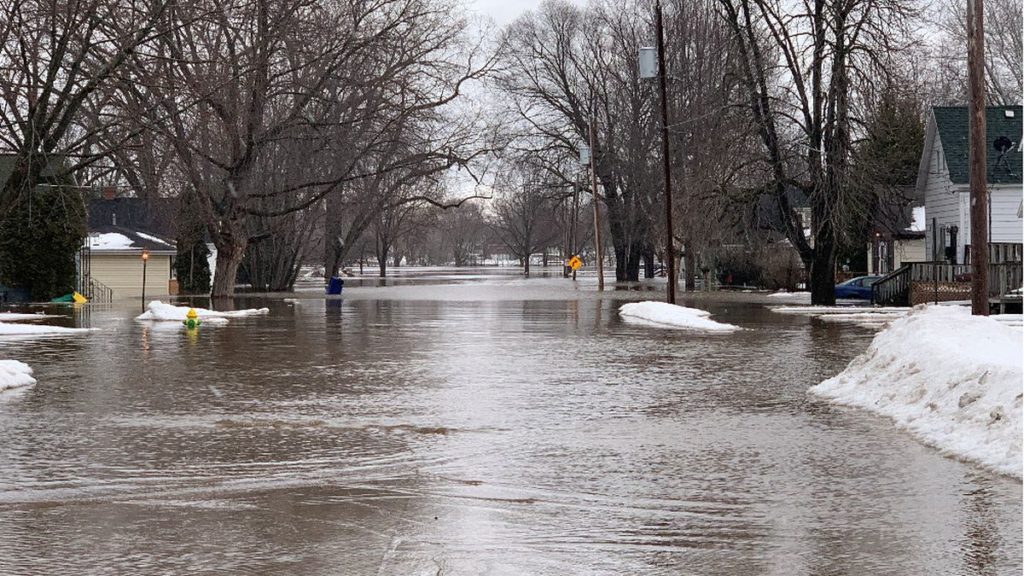 Flooding along the east side of Green Bay in March 2019. Image credit: WBAY-TV.

In March 2019, a massive snowmelt combined with heavy rain over frozen ground disrupted lives and flooded homes along the East River near and in Green Bay. A total of 50 homes were condemned.

A new partnership that includes Wisconsin Sea Grant seeks to address conditions that caused the flooding and work with communities within the East River Watershed to increase their resiliency to such events. Other project partners include NEW Water (the brand of the Green Bay Metropolitan Sewerage District) and The Nature Conservancy. The communities include Brown County, Calumet County, Manitowoc County, the cities of Green Bay and De Pere, the villages of Allouez and Bellevue, and the towns of Ledgeview, Rockland, Wrightstown and Holland.

“One thing that’s unique is that we want to work within the watershed and not just within municipality boundaries or county borders,” Noordyk said. “Working beyond their borders is very challenging for local governments. So the partnership between NEW Water, The Nature Conservancy and Sea Grant is really to help provide that coordinating capacity and bring together those communities that are being affected by flooding and water quality issues to help them learn how to move forward.”

The year-and-a-half-long project, which was recently funded for $50,000 by the Wisconsin Coastal Management Program and $123,000 by the Fund for Lake Michigan is comprised of four parts. The first is an East River Flood Study. Noordyk explained that this will involve development of a hydrologic computer model to understand current and future flood risk for the watershed. Sea Grant’s Coastal Engineer Adam Bechle will take the lead on that. He will work with Chin Wu, professor in the department of civil and environmental engineering at the University of Wisconsin-Madison, to develop the hydrologic model.

Noordyk said the East River is a major tributary to the Fox River, which flows into the bay of Green Bay. Besides the flooding risk, the East River provides the highest load of sediment and unwanted nutrients to the bay, which contributes to poor water quality and clarity, and toxic blue-green algae blooms. 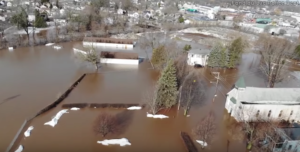 “The upper parts of the watershed are dominated by agriculture. In the lower parts, it’s more urban and developed suburban areas,” Noordyk said. The clay soils and compacted land in the upper watershed contribute a lot of agricultural pollution and excess water runoff. Once this water reaches the paved surfaces in the urban areas that were developed over floodplains and have outdated and aging stormwater infrastructure, it can cause flooding issues. Warmer winters are compounding the problem, with more frequent and intense rainstorms resulting from a changing climate in the region.

The project’s second part involves formation of an East River Watershed Resilience Community of Practice. This will be facilitated by an East River Resiliency Fellow who has been hired by The Nature Conservancy with Noordyk’s guidance. Through regular meetings, the coordinator will help build knowledge and relationships among local officials and staff, practitioners, scientists, NGOs and outreach specialists in the watershed.

The third part is development of a community-based watershed resilience framework. Noordyk and the resilience coordinator will work with the communities to draft the vision, goals and near-term actions for building community capacity and flooding resilience.

David Hart, Wisconsin Sea Grant’s assistant director for extension, will lead the final part of the project, which involves working with the UW-Madison Cartography Lab to create interactive maps to communicate the flood study’s findings and recommendations to the communities and partners involved.