A journal article that grew out of Wisconsin Sea Grant-funded research has been honored with a Publications Award from the American Fisheries Society (AFS), presented today at the society’s annual meeting in Spokane, Washington.

The society honors one outstanding paper from each of its journals annually with this award. “Widespread Seropositivity to Viral Hemorrhagic Septicemia Virus in Four Species of Inland Sport Fishes in Wisconsin” was published last year in the Journal of Aquatic Animal Health. Its authors are Whitney A. Thiel, Kathy L. Toohey-Kurth, David Giehtbrock, Bridget B. Baker, Megan Finley and Tony L. Goldberg. 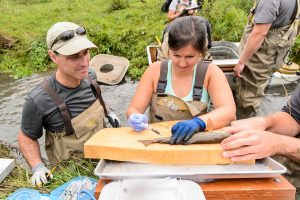 The team’s work revealed a more accurate and complex picture of Viral Hemorrhagic Septicemia Virus (VHSV) than previously understood. They found evidence of VHSV farther inland than anticipated, as well as “hot spots” and “not spots”—affected and unaffected bodies of water—that were surprisingly close together.

Said Thiel, who completed her master’s degree at UW-Madison in 2019, “I was surprised and flattered when I heard about the award. What a great feeling to know our research, something we all worked so hard on for so many years, is appreciated by the scientific community.”

In addition to serving as the paper’s first author, Thiel presented the group’s work at the Great Lakes Fish Health Committee meeting last year, where it was well received. “I think others are grateful for the insights into inland VHS prevalence that this wide-scale surveillance effort has provided,” she said.

Goldberg, who holds the John D. MacArthur Chair in the Department of Pathobiological Sciences at the UW-Madison School of Veterinary Medicine, also noted that the publication sparked discussion with others in the field. “I suspect it was an eye opener because it changed our vision of what VHSV is, from a lethal and geographically restricted pathogen to a sometimes not-so-lethal pathogen with a far wider distribution than originally suspected.” 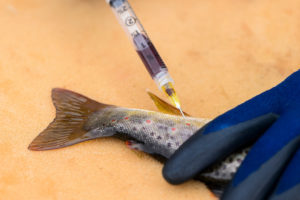 For the study, blood samples were drawn from fish in a non-lethal way. (Photo: Bryce Richter, UW-Madison).

The work has implications for mitigating the virus’ spread. Said Goldberg, “VHSV is not ‘everywhere.’ Rather, there are antibody-negative water bodies very close to antibody-positive water bodies, so the risk of spread is still there. In other words, our paper should not be interpreted as an excuse to throw up our hands. There’s still a lot of prevention that can be done.”

Looking ahead, he anticipates that researchers working in other regions will find similar patterns in VHSV occurrence. In the meantime, Goldberg is pleased by the AFS honor and credits former graduate student Thiel’s role in the effort. “I’m very proud of what Whitney did during this project. There’s no doubt in my mind that we would not have been able to do a study like this without a stellar–and Sea Grant-funded–student like Whitney.”