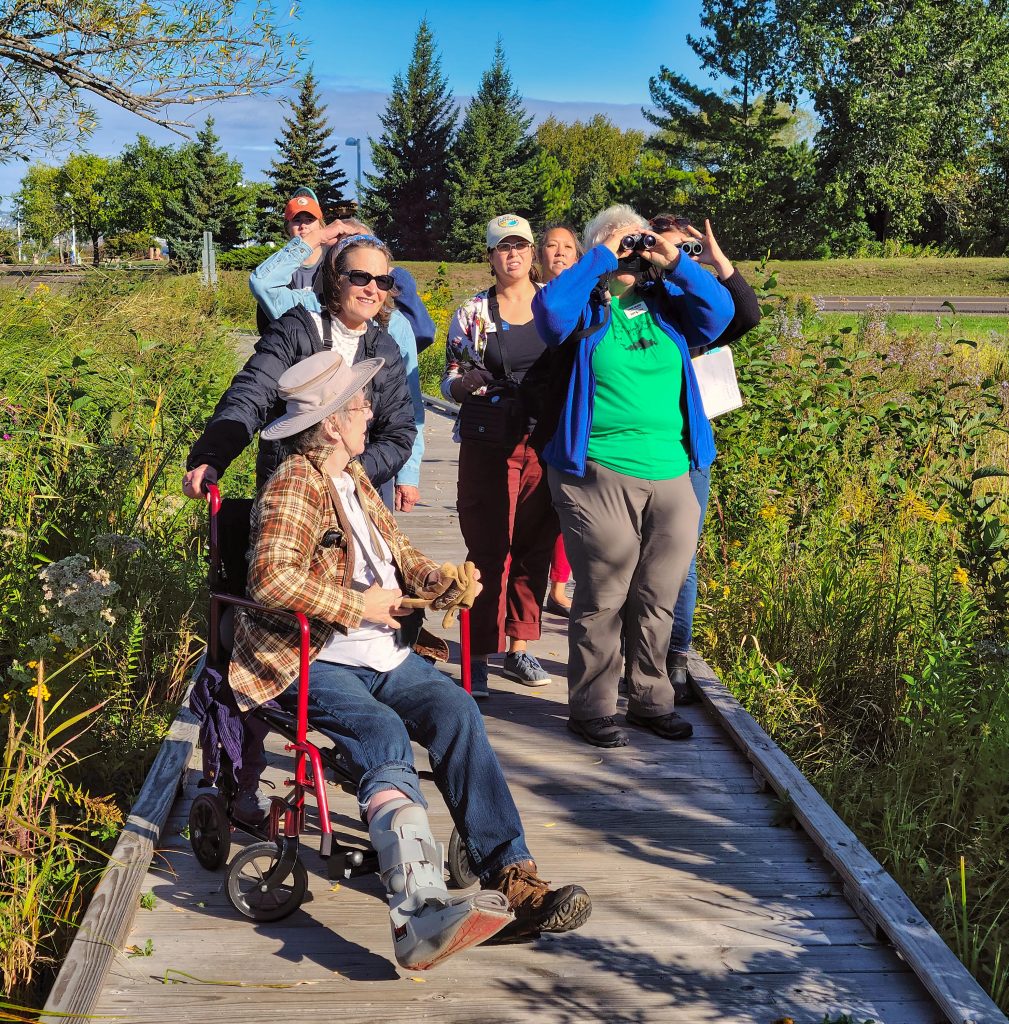 Barker’s Island in the Duluth-Superior Harbor was the site of a free, bird-focused morning recently. People of all ages and ability levels attended an accessible birding outing led by experts from the Hawk Ridge Bird Observatory and the Friends of the Lake Superior Reserve.

The group met at the Lake Superior Estuarium on the island in Superior. They were welcomed by Luciana Ranelli, education coordinator for the Lake Superior National Estuarine Research Reserve. She explained the three options for learning about birds. First was inside the Estuarium, where staff from the University of Wisconsin-Extension Upham Woods Learning Center had arranged bird artifacts and learning stations. Second was a spotting scope behind the Estuarium staffed by Pat Collins, a volunteer birding expert with the Friends of the Lake Superior Reserve. This was designed for birders with mobility issues or anyone who preferred a more stationary option. The third was a guided tour along the Barker’s Island boardwalk with Margie Menzies, education director for the Hawk Ridge Bird Observatory in Duluth. 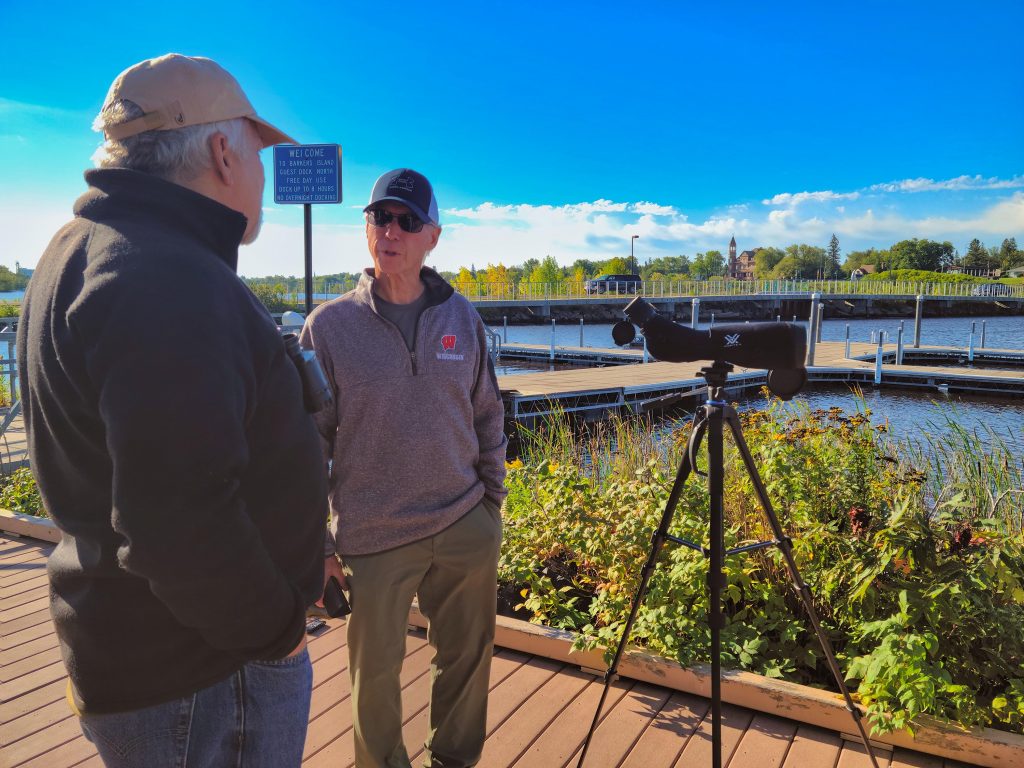 Superior resident and former city council member Mick MacKenzie recently had hip surgery, so the second station appealed to him. He said he came to the event because he’s “enjoying life. It’s good to be out in nature.”

After discussing the population health of kingfishers in the estuary with Collins, MacKenzie said, “When I was a kid, there was nothing down here on Barker’s Island. We’d come here to explore and play, so all this new development is really something to see: the whaleback and the hotel . . .”

MacKenzie expressed surprise that the birds were still around in September.

“They migrate through starting this time of year,” Collins said. “As long as there are flowers in bloom, they’ll stick around.”

Meanwhile, Menzies’ group got oriented to their binoculars and began their walk on the boardwalk. Sightings of the ubiquitous herring gulls around the island prompted Menzies to discuss a rare bird that steals gulls’ food: the parasitic jaeger. A Jaeger Birding Festival is held on nearby Wisconsin Point annually this time of year because it’s a prime time for spotting jaegers during their migration south from the arctic.

Her discussion was interrupted when two pigeons landed on the Estuarium roof. “When you look at birds, particularly from a distance, what do you notice about that bird that helps you think about what it is. What kinds of diagnostic clues can you look at on that bird?” Menzies asked.

Someone mentioned the pigeons’ orange feet.

“Yes, those red-orangey feet are a dead giveaway for pigeons. And a nice chunky body,” Menzies added.

The group moved farther along the boardwalk, following the shoreline of the island to the public beach, which is surrounded by native plants. Along the way, they spotted a turkey vulture, common mergansers, mallards, cormorants and warblers. 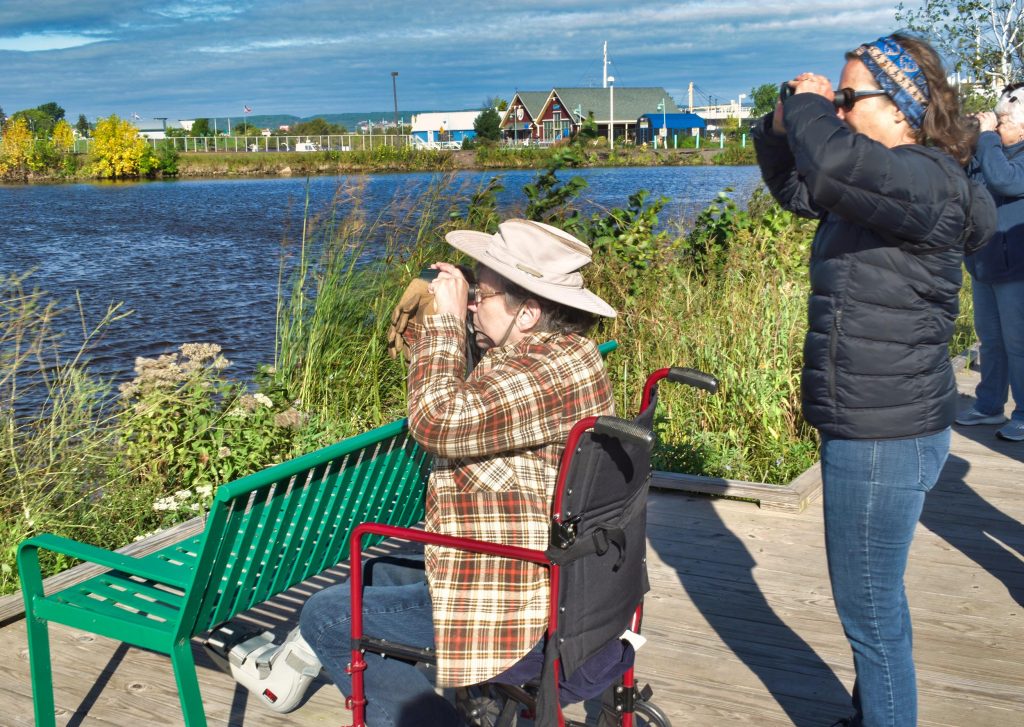 Kate McCall, a member of the board of directors for the Friends of the Lake Superior Reserve group, said she attended the event because, “This is the stuff I love.” She is interested in making the outdoors more accessible for people of differing abilities and attended an accessibility training session offered by the Reserve previously.

Just one of the things she learned was that cormorants don’t shed water off their backs as easily as other birds after they’ve been diving. “That’s why they’re so clumsy when they fly afterwards,” McCall said. “I always wondered about that. It’s fun to learn more, not just about the habitat of birds, but their patterns of flight, as well. I just really enjoyed it.”