Brownlee Reservoir on the Snake River. Image by Ben Peterson.

Methylmercury is formed by bacteria in wetlands and lake muck where there’s little oxygen. This harmful neurotoxin then gets into fish and that’s why there are fish consumption advisories for lakes and rivers.

Muck aside, other specialized conditions may form methylmercury, and Katherine (Trina) McMahon suspects she and her collaborators might have found them in the reservoirs of Hells Canyon, which is on the Snake River between Idaho and Oregon. The Hells Canyon part of the Snake River is crossed by three dams and their reservoirs, two of which feature low-oxygen and nutrient-rich (eutrophic) conditions that methylmercury-producing bacteria favor.

McMahon, a Vilas Distinguished Achievement Professor at the University of Wisconsin-Madison; David Krabbenhoft, research hydrologist and team leader of the U.S. Geological Survey (USGS) Mercury Research Laboratory in Middleton; and Brett Poulin, a USGS chemist in Boulder, Colorado, were recently awarded a National Competitive Grant from the USGS in cooperation with the National Institutes for Water Resources. They are using the three-year grant to study the “weird” methylmercury conditions in the reservoirs.

McMahon explains, “What is weird about this system is that the conditions in the water column in the reservoirs are not those that mercury researchers traditionally think are conducive to the production of methylmercury. But we see signs that it’s actually being produced there in the water rather than wetlands or in the mucky bottom sediment where it’s usually produced. And the organisms that are in the water are not known to be the usual methylators. The mercury is being produced under conditions that nobody has ever seen it produced before.”

She suspects the area’s unique geochemistry might account for some of the methylmercury production. Pollution might be another cause. “A lot of nitrogen and phosphorus is going into the system from various upstream sources,” McMahon said.

McMahon and her crew hope to discover what’s driving the mercury production in the system and causing high levels of mercury in fish that a dozen Native American tribes and anglers eat. “If we can prevent the bacteria from being in the system or from doing their normal metabolism, we can hopefully stop the production of the methylmercury,” McMahon said. It could also shed light on other water bodies impacted by high levels of nutrients, such as eutrophic Lake Mendota in Madison.

The project piggybacks on a larger USGS effort led by Krabbenhoft to measure the amount of mercury in the reservoir environment and animals, funded by the Idaho Department of Environmental Quality, the USGS, and the Idaho Power Co. The company operates the hydroelectric dams on the Snake River that form the reservoirs. 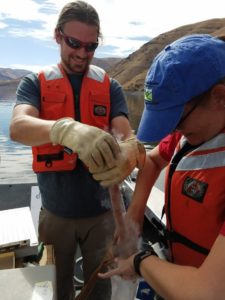 Although they just received the National Competitive Grant, McMahon’s team already has two project field seasons under their belts, thanks to a Kellett Mid-Career Award McMahon received from the Wisconsin Alumni Research Foundation. Their field work involves sampling water deep in the reservoirs along a 100-mile stretch of the Snake River, preserving the water and then filtering it through a membrane that captures methylating bacteria.

Afterward, they put the filter into a vial and freeze it quickly. To do that, they need to bring liquid nitrogen on the boat, which McMahon said, “is always an adventure” due to its special handling and storage requirements. The researchers collect several hundred samples each time they go out. “But they’re small vials, so they don’t take up a huge amount of space,” McMahon said. “Then we have to ship them back to Madison on dry ice, which is also often an adventure.”

Once in the lab, the samples are stored at -80 degrees Celsius until McMahon’s Ph.D. student Ben Peterson processes them, extracting the bacteria’s DNA from the filters to learn what kinds of organisms might be making the methylmercury.

McMahon said the ease and power of genome sequencing has offered new ways to understand the methylmercury process. “In general, not much is known about which organisms make methylmercury in any kind of system. In textbooks, there’s things about sulfate-reducing bacteria, but in the past five years or so, people have discovered using genomes that there’s hundreds of different kinds of bacteria that seem like they can do it. So now, everybody’s like . . . maybe it’s happening in all these places we didn’t check. Everybody’s revisiting the dogma and revising it as we go.”