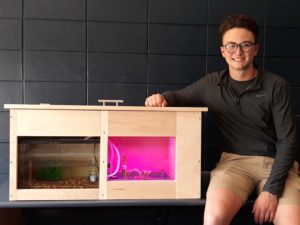 Three of the team members were part of a team that won two awards in last year’s competition. They were team captain Drew Polak, a senior who plans to attend the University of Wisconsin-Platteville for engineering after he graduates; Brendan Blystone, a sophomore who developed the system’s automated monitoring coding; and Teeny, a goldfish who represented an aquaculture fish species.

The students were challenged to create a small-scale aquaponics system, which included developing a way to monitor system parameters such as air and water temperature, luminosity and soil moisture. They also developed an action plan to help ensure the business succeeds.

Their system featured a self-contained aquaponics unit in a sleek countertop cabinet with a built-in 10-gallon aquarium. The adjacent gardening system was accented with grow lights and a mounted touch-screen tablet for system monitoring.

“They really upgraded the automated monitoring system this year,” Dachel said. “I was so impressed with it!”

Aquaponics is a combination of aquaculture, which is growing fish and other aquatic animals, and hydroponics, which is growing plants without soil. To be successful, an aquaponics unit must carefully balance nutrients, fish, bacteria and plants. Anything out of balance will cause the system to collapse. (A video produced by Sea Grant presents one of these systems.)

The Merrill team competed against 19 others from across the Midwest, totaling over 300 students in grades 9-12. The team benefitted from information provided by the Sea Grant-sponsored Northern Aquaculture Demonstration Facility.

“They provided a virtual tour, plus schematics and baseline information that the students needed,” Dachel said.

The pandemic provided challenges to the team last year. This year was no different.

“If anything, it offered even more challenges,” Dachel said. “Even though we could have been face-to-face, due to student options for attending school at home or in a hybrid fashion, and due to the number of quarantines and health factors, it was very difficult to get students to meet in person to discuss the project. Most of the work occurred at home in separate areas or in the classroom at separate times when others weren’t around. When you’re working on circuitry, that’s pretty difficult.”

However, something must have gone right, given the team’s outcome. Just think what they could do if they were all together.

Oh, and Teeny? He now lives at home with Dachel.